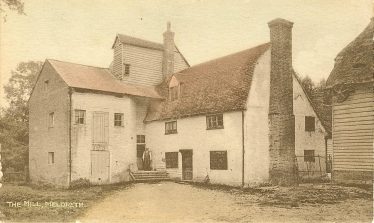 In the name of God Amen

This is the Last Will and Testament of mee Ffrances Halfeheide of Meldreth in the County of Cambr Widdow made this Fowerteenth day of November in the yeare of our Lord God One Thousand Six Hundred Seaventy and Seaven.

First, I render my soule to God and my body to the Earth to bee decently buryed, And for my Temporall estate and goodes I dispose thereof as followeth, viz

Imprimis I give and bequeath unto Robert Fuller the younger my Grandchilde his Executors administrators and assignes All that my lease of all that Watermill in Meldreth aforesaid withall closes of pasture and other groundes whatsoever to the said Watermill adjoyning or belonging contayning six acres (be it more or les) with the appurtenances now in the use or occupied of James Webster Miller or his assignes which I now have or hold of the Maior Commonalty and Cittizens of the City of London Governors of the Possessions of the Hospitalls of Edward the Sixth late King of England of Christ’s Bridewell and St Thomas the Apostle by Indenture under their Common Seale and also all the said Watermill and all the pastures lands groundes woodes underwoods profitts and other things whatsoever in or by the said lease or Indenture to mee demised or granted and every part and prell thereof with their appurtenances And all my power and right of renewing the said lease and all my right title interest Rever[sion] Remainder terme of years and time to come claim and demand whatsoever of in or to the said Lease, Watermill, Lands, groundes and premises with their appurtenances and every part thereof, Subject nevertheles to the Provisoe herein after mentioned (that is to say)

Item.  I give to my sonne in law John Harison five shillings

In Witness Whereof I the said Frances Halfeheide have hereunto set my hand and seale the day and yeare first above written.

Sealed subscribed published and declared by the said Frances Halfeheide for her Last Will and Testament in the presence of:

Frances died in 1680 and was buried in Holy Trinity churchyard, Meldreth on 11th October 1680.