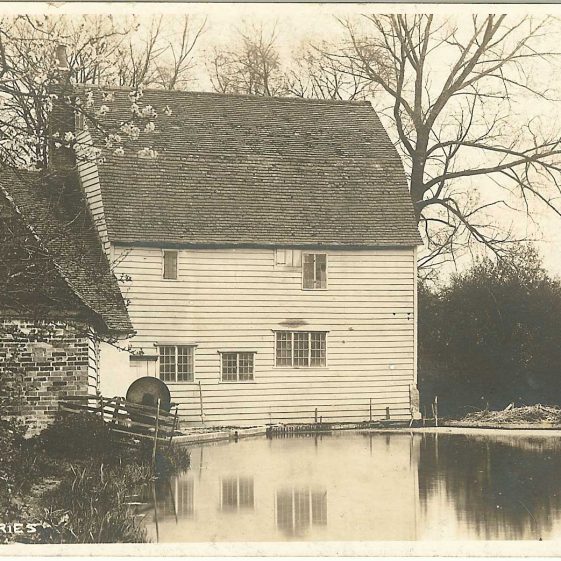 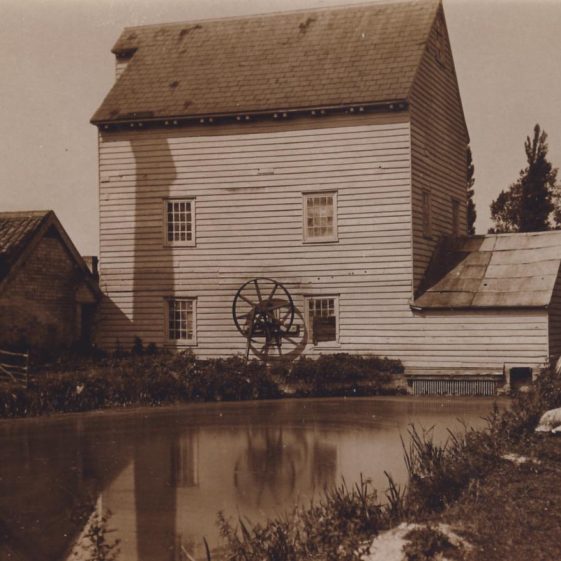 Flambard's Mill, before it was destroyed by fire 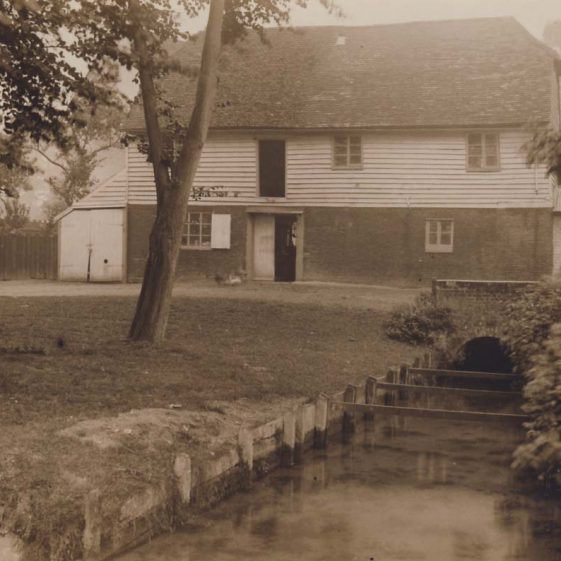 The Domesday Book of 1086 lists 8 mills in Meldreth and one mill in Melbourn.  From 1696 to 1736, there were only three mills remaining: Topcliffe Mill, held by Mary Surplus and then by James Scruby; Flambard’s Mill held by William Horsley; and Sheene Mill, held by Michael Lambkin and then by Richard Ellis. [2].

Flambard’s Mill was situated at the end of Flambard’s Close, near Flambard’s Manor House.  Although Flambard’s Mill existed in the seventeenth century, a sale notice of 1844 described it as “newly-erected”. It was destroyed by fire c. 1910.  It was also known as Sheldrick’s, Quakers and Burnt Mill.

Sheene Mill is just over the border in Melbourn, but was part of Sheene Manor which belonged to Meldreth.  It ceased to operate in around 1930 and is now a restaurant.

Evidence for Other mills in Meldreth

In 1332, Ralph FitzWilliam held a quarter of a watermill in Meldreth.  This was presumably the Church mill, which was recorded from the late 14th century until 1438. [1]

The Topcliffe Manor Court Rolls mention the existence of other mills in addition to Topcliffe Mill including the Church Mill, a mill called Hale Mill and possibly another called Cagewynnes.  The following extracts from the manorial court rolls give examples:

1382 Meldreth.  View of frankpledge of William de Notton and his companions held there on Monday, morrow of the Exaltation of the Holy Cross, 6 Richard II
The abbess of Chaterys is to look after her watercourse from Cherchemele to Halemelle.  Amerced 10/- for neglecting it.

1417 Meldreth.  Pole.  View of frankpledge with court held there on Friday after the feast of St. Denis, 5 Henry V
John Milward (4d) blocked the water too high at Le Chirchemylle to the hurt, etc.  John Claverynge (2d) the same at the lord’s mill.

1438 Meldreth.  Topclyff.  View with court held there on Thursday after the feast of the Conception BVM, 17 Henry VI
William Mellere (12d) blocked and kept the water too high at the watermill called Le Chirchemelle so that the highway to the gate of the Rectory was submerged and inundated to the common hurt.  He is ordered to amend it against the next court on pain of 20d.

1443 Melrethe.  View with court held there on the Friday before the feast of Saints Apostles Simon & Jude, 22 Henry VI
Thomas Wodeward, miller, kept the water too high at the mill at Cagewyns so that the highway was flooded.  ?3d.
Thomas Bernard, miller, of Chyrchemylle blocked the water and kept it too high so that the highway to the gate of the Rectory was flooded.  3d.

The location (from north to south) of Topcliffe Mill, Flambards Mill and Sheene Mill