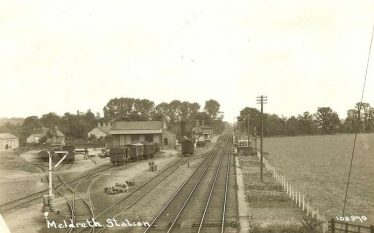 zoom
View of Meldreth Station and Goods Yard looking north. The transhipment warehouse is in the centre left of the photo. ~1925 - 35
Bells Postcard 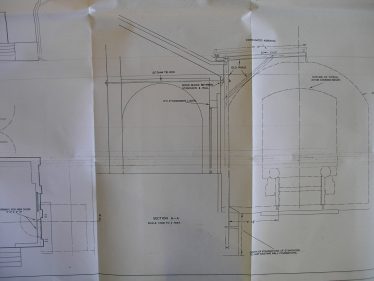 zoom
One of a series of drawings showing modifications to the Goods (Transhipment) Shed made in 1953. More drawings are attached on the bottom of this page.
Tim Gane with thanks to the Chelmsford Record Office 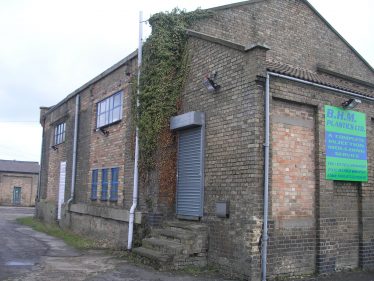 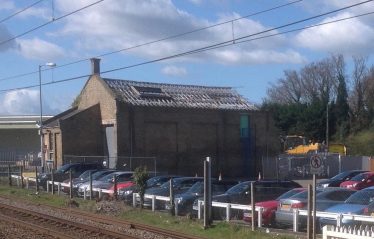 zoom
The Demolition of the Transhipment Warehouse, 31st March 2015
Photograph by Peter Draper 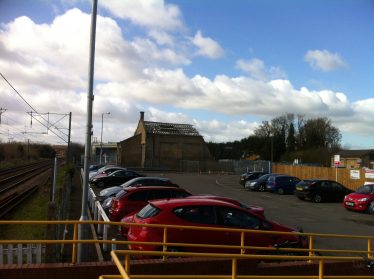 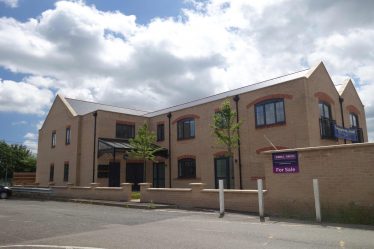 zoom
The flats that were built on the site of the transhipment warehouse, pictured in June 2018
Photograph by Kathryn Betts

The transhipment warehouse stood at the southern end of the station car park. It was originally used as a warehouse for the transhipment of all sorts of goods, farm materials, fruit, root crops, animal feed etc. and was later owned by BHM Plastics. It was later sold and then in April 2015 it was demolished.

Fortunately we have a number of photographs of the old warehouse as well as plans of its internal layout. The following is a description of the building during its use up until the early 1960s.

On the east side (i.e. facing the railway) was an opening, with two large doors through which a railway box wagon could pass. This allowed the easy transfer of cargo under cover from the box wagon directly onto the raised landing stage inside the warehouse.

Passage from the railway siding into the warehouse was facilitated by a manually operated turntable which was moved by one of the resident horses. Individual wagons could be moved in and out of the warehouse as required and lines of railway wagons assembled on the adjacent siding ready for onward transportation by rail.

There was a small office at the east end of the warehouse.

The original building was constructed sometime pre 1890, probably some time soon after the railway came to Meldreth in 1851. Modifications were made in 1953 to add an additional awning and to modify access to the office area. The railway lines were removed from inside the building and the raised platform was extended to cover the railway lines and the crane was removed. Presumably these changes were the result of the decrease in rail traffic prior to the yard closing in 1963.

The huge railway wagon doors were covered with a roller shutter, the awning removed and the two large sliding doorways were bricked up.

The building stood idle until the 1990s when it was occupied by BHM Plastics until ~2013 after which the building was put up for sale.

Early in 2015 the roof tiles were removed allowing water ingress and general deterioration and then ~2 months later, in April, the building was demolished.  A planning application was submitted to build residential flats on the site and these were built from 2017-2018.