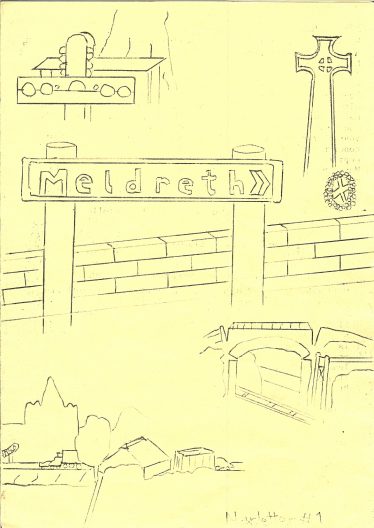 zoom
The cover of the first issue of Meldreth Matters

Meldreth Matters was started by Ann Barnes in 1988.  After months of research and many letters and telephone calls, she felt that there was a need for a regular newsletter in the village.  Ann is a member of the MM team to this day and has written the following article on the history of MM and how things have changed in those twenty years.  Typically modest, Ann has neglected to mention the part she herself has played but it is true to say that without Ann there would have been no Meldreth Matters.  The article below originally appeared in the 20th anniversary issue of Meldreth Matters in November 2008.

The days when typewriters had black and red ribbons, so one had the choice of printing black or red type, capitals or lower case.  The days when Meldreth boasted a Guide Company, a Scout Troop, Brownie and Cub Packs, a Young Wives and a Red Cross Group, as well as many other organisations that are still running.  The days when posters had to be written by hand and put up wherever possible in the village, as the only means of getting information out to the community.

That was when it seemed a good idea to have a news sheet (or even, in our wildest dreams, a proper magazine!) that would reach every house in the village to disseminate important information, such as who was doing what and when, thereby cutting out much of the need for all those hand-produced posters.  But Challenge No.1 was how to publicise an open meeting to discuss said good idea!  In the event, enough people read the hand-written posters in various shop windows, and came to the meeting and supported the idea, to make us certain that it was a viable one, and that it would be worth proceeding.

Then came Challenges 2 and 3, and many, many more in quick succession.  If I remember correctly it was Margaret Hunter who solved the first one; namely of how to finance the project, by suggesting that we approach Eternit for sponsorship, as our arithmetic showed that we would get insufficient funds from advertising to pay the printing costs in the first instance.  And it was Brian Rastall who suggested not only that we ran a short single-page diary-cum-newsheet for two months to test the reception in the village and to show Eternit that we meant business, but also offered to fund those two issues himself.  A generous gesture indeed: I am certain that Meldreth Matters would never have got off the ground if it hadn’t been for him.  So we then approached Eternit, and thanks to their generous involvement, with the help of Anne Lambert and Nick Monks there, we were able to have a four page magazine run off on their photocopier right through to the end of 2002.

Then the miraculous happened.  The magazine, as it was turning out to be, was to be spared my somewhat unprofessional efforts on my old sit-up-and-beg typewriter by Lesley Farbridge.  She offered to do the typing and cut-and- paste preparation of copy on her posh electronic typewriter!  It is hard now to imagine just what was involved in that job.  The material had to be typed, then each article, advertisement and illustration had to be literally cut out and pasted on to the sheet that would go for photocopying.  Proof-reading was a nightmare, as any major mistake might mean having to redo the entire page (no delete buttons in those days!).  Often we would simply snip out – oh so carefully – the one word or letter written correctly and stick it over the offending word, hoping (a) that it would fit, and (b) that the edges wouldn’t shadow and show up on the photocopied page!  Lesley’s expertise was even further enhanced by the lovely illustrations she managed to produce each month, both in the inside pages and on the covers for a number of months, making Meldreth Matters, as it had now become known, the quality magazine we have tried to make it ever since.  Not only all that, but she has been our first and only Chairman of the Meldreth Matters team over its lifetime, steering it in the direction it has taken, steadily expanding and improving, and becoming the magazine it is today.

Editing the magazine was interesting then too.  Pieces for inclusion would come through the door, people would telephone with requests and on more than one occasion I was handed copy when out shopping or collecting my children from school.  This was fine until I once forgot to remove said article from my coat pocket and had to face the wrath of the writer the following month when it failed to appear in Meldreth Matters!  Things are so much easier now with email!!

Since those days Editors have come and gone, members of the Team have changed, and we have had several Distribution Managers.  Lynn Florence took this job over from me early on, then Richard Harper, Annie Wing, and finally Ken McLean who has had the job of getting the magazine out to the deliverers each month since 2000.  But there has been one notable constant.  This is the amazing willingness of people to volunteer to deliver the magazine month after month.  Our first plea for deliverers had a wonderful response, and we have never been short of people to get the magazine out to every house and business in the village.  That first team included Anne Jacques, Ann Askham, Roz McKenzie, Sheila Pinney, Daphne Jones Barry and Sue Warboys, all of whom are still delivering Meldreth Matters, along with Joan Fallon and Ron Comben who joined the team shortly after!  Several Mums and Dads have taken over delivering the Matters after their offspring either gave up or moved away, making the Broadhurst, Hollamby and  Taylor families equally impressive in their commitment to the job!  Our huge thanks to them, as well as to all those others who over the years have helped in this way.

Three years after the magazine started Sandra Pegg took on the mantle of Editor, and her wonderful flair for words and commitment to the magazine enhanced it enormously.  But it was only another few years before she moved away from the village, and Joe Gelling took on the job, ably helped by Jackie.  David Morfill had already joined the team to help with layout, Lesley having found that the hours – and hours and hours – spent cutting and pasting were conflicting with the demands of being Parish Clerk.  In addition he was able to bring us into the computer age with desk-top-publishing, thus making columned pages possible.  Later Richard Burns joined the team to help Jackie with layout, working monthly miracles getting all the advertisements into the magazine in a way that did not interfere with the copy but still did justice to our advertisers.  Yes, it goes without saying – do support them – they make the magazine possible in its free-to-every-household format!  It was also due to both David and Richard that we were able to vary the cover designs, until Richard finally came up with the current design of the village map in 2001.  This has been used, with only minor modifications, ever since.

It was during Joe’s time as Editor that we decided to have a good look at what we were doing and how we could improve the Matters, and it was decided to increase our advertising space and revenue, and go for a bigger magazine printed commercially.  We were indebted to Eternit for their generous sponsorship for all those years.  While they could run off the copy for us, we were restricted to four pages of copy only, plus one page of advertisements, and we still had the job of collating and stapling to do, and the whole production run was becoming cumbersome.  So in 2002 we went commercial, increased our advertising copy and the magazine started to expand in size.  The number of copies needed to cover the village has also grown from the original 597 copies of the first issue to the 790 that go out each month now.

Ill health forced Joe and Jackie to relinquish their joint role in editing and preparing copy for the magazine at the end of 2004, and Kathryn Betts nobly took on the job at the start of 2005.  She works wonders with her computer skills and has brought in many improvements both in layout (most notably the way the diary page is formatted), and in the content and variety of material which has expanded and developed in interest and quality, so much so that we were Highly Commended in last year’s Village and Community Magazine Awards sponsored by Cambridge Building Society.

The cover for this issue says much about the changing face of Meldreth Matters over the years.  That it has progressed so successfully from a single page newsletter to the quality magazine it is today is due to huge effort and commitment from many people, to the continuing support of our advertisers, to the sponsorship for many years from Eternit, and to you the readers who provide the material and tell us how much you value your magazine!