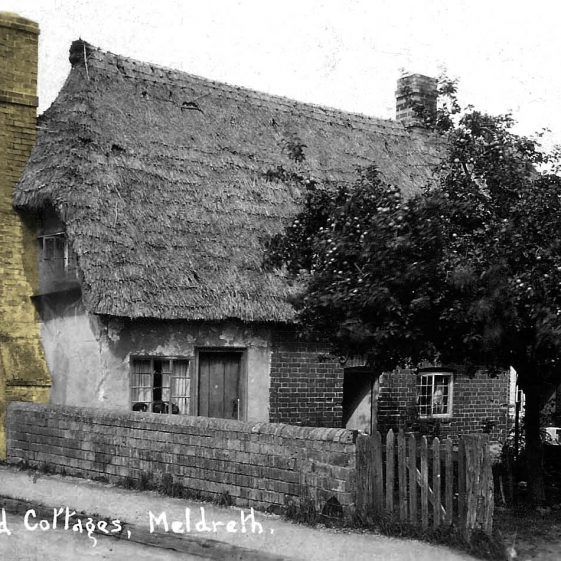 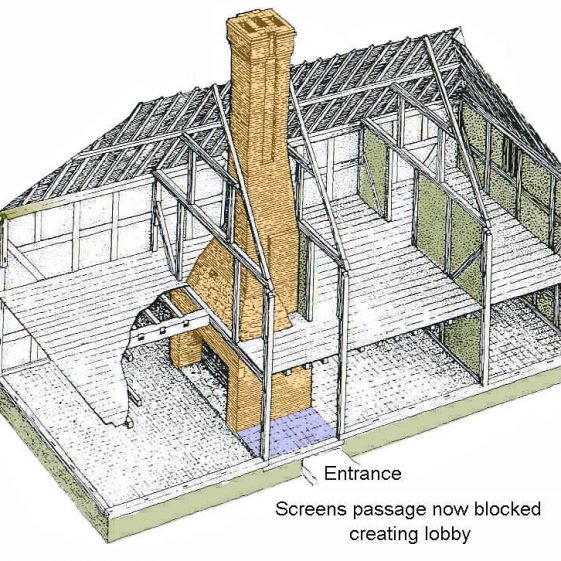 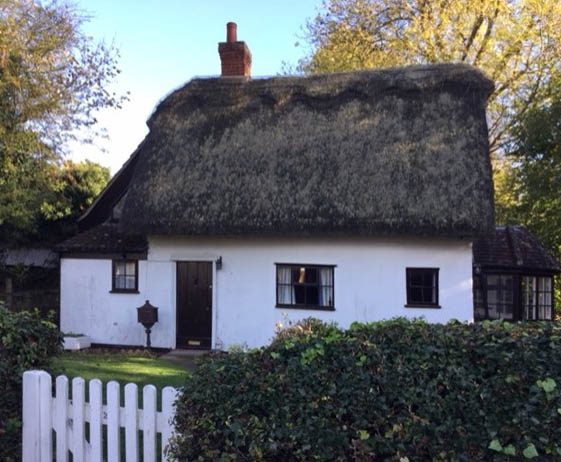 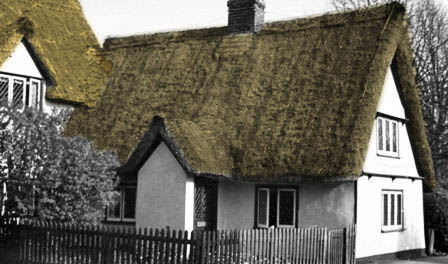 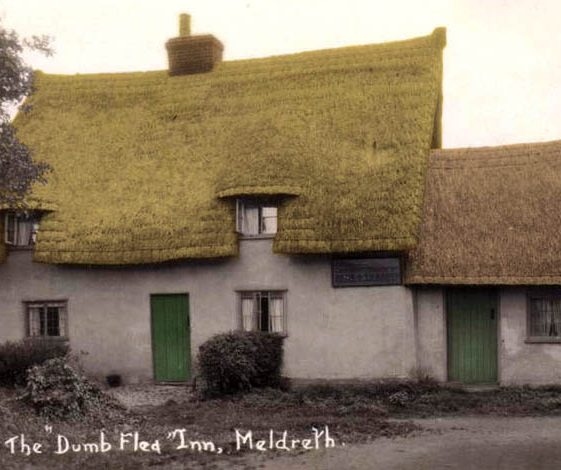 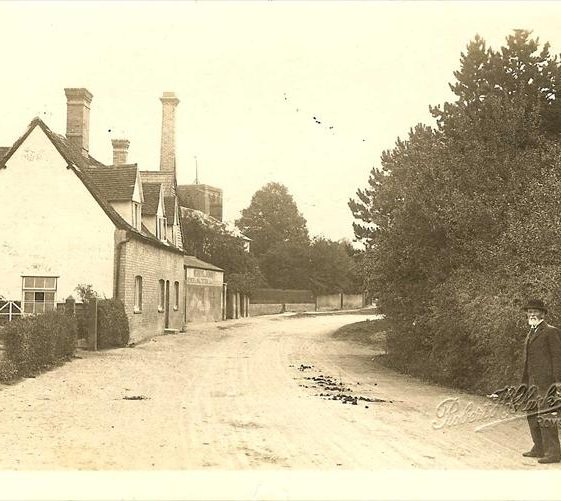 The Green Man, when it had brick facing
Robert H Clark postcard

“I did in Drury-lane see two or three houses marked with a red cross upon the doors, and “Lord have mercy upon us” writ there – which was a sad sight to me, being the first of that kind that to my remembrance I ever saw.” Samuel Pepys

Somewhat ironically it was the Black Death – the Great Plague – combined with worsening weather conditions, that acted as the catalyst for the building of hundreds of half-timbered homes across the land.

Between the years 1348 and 1636 the Plague was a recurring phenomenon which significantly reduced the size of the population. Figures produced vary widely from a reduction of between ten percent and sixty percent but regardless of accuracy the labour available to farm and manage the land was significantly reduced. De facto it also increased the availability of now deserted or unworked devalued land.

Landowners found themselves in a position of having to attract a diminished but increasingly empowered workforce demanding better wages, extended cheaper loans, and reduced rents. Indeed, with a destabilised economy it now benefitted some land owners to sublet their landholding as tenants paying fixed amounts of rent would provide them with a more reliable source of income.

Whilst manorial revenues deteriorated, upwardly mobile peasants with their improved earnings and relative wealth could now afford to buy or rent more land, produce a surplus for resale, make and sell home-made goods, and utilise the profits to build new cottages.

These cottages are the historic buildings we see today and there were many more built that no longer stand. Surveys from this period show large numbers of carpenters employed and demand depleting available wood supplies. Even what we would consider to be low-status employment – manufacturing daub for panel infill – had its own full-time specialists.

This assessment of peasant lifestyle conflicts with the stereotypical view of a down-trodden serf stood knee-deep in mud, scraping an existence whilst living in a one room cold, damp, draughty hovel. That may have been true for the very lowest of the peasant class living off the generosity of the village through parish relief but it certainly was not true of the remainder.

Now a slightly derogatory term, back then a peasant is better categorised simply as one who made his living from the land. There were even different classes of peasant.

At the upper end of the peasant class were families such as the Marvells of Meldreth. They were the yeoman. Below them came the husbandman – literally, the house man, the villein, and lastly the cottar – all nominally peasants but differentiated by size of landholding, income level, and degree of servitude toward the lord of the manor.

Even so, the boundaries between the classes and social groups were blurred and further sub-divided, varying from region to region.

Although the focus of this article is the three-bay design there are also examples of both one and two bay cottages as seen in the images above. It is tempting to imagine the size of cottage was commensurate with the peasant’s position on the social ladder but it should only be assumed.

As noted in the introduction, no single cottage remains in its original state. Every historic house in Meldreth incorporates most, if not all, of the significant changes detailed below.

Known as the Great Rebuilding, this socio-economic process swept the whole of Europe from 1570 onwards wherein more solid and permanent buildings became the norm. Every listed cottage in Meldreth incorporates most, if not all, of these changes.

Often overlooked as something whose presence is taken for granted it is worth considering the most important driving force behind the developmental changes is the fire and its hearth.

Originally a shallow pit in the floor, sometimes stone or tile lined and avoiding overhead timber beams, the fire was at the heart of the building. To the occupants the need to manage not just red-hot sparks but also clouds of acrid smoke was of fundamental importance.

The original open hall design with its high roof space caused smoke to be drawn upwards and vented through a void in the roof. Surviving roof timbers suggest a simple four-sided wooden box fixed at the ridge and probably topped by an inverted V shaped cowl.

In addition, it was possible to open the two opposing entrance doors and create a through draft to better ventilate the smoke. By varying the amount each door was opened the through draft could also be made stronger to assist when lighting a fire and lessened to prevent the fire burning too brightly.

There is some evidence of early improved fire and smoke management using firehoods and low stone or clay guard walls but the most significant development in the modern era was the installation of a brick-built hearth and chimney with a stack rising above the roofline.

Brick had been a comparatively rare and valuable commodity and its use reserved for the wealthiest in society but a combination of larger scale production, improved transport links, and increased earnings made it both more affordable and more widely available.

Now that the fire could be contained with less accidental fire risk home owners took the opportunity to relocate the hearth by moving it closer to the screens passage, improving both its functionality and air quality, whilst increasing the usable space in the living area.

Some hearths were small and simple. Others were so large they became rooms within a room. Typically, wider at the base for better structural integrity the larger hearths sometimes completely blocked the screens passage and so-called lobby entrances were created either side where one entered the building. The increasingly isolated door at the other end of the screens passage may have been left in situ but others were blocked off or converted to a window.

Opening the chimney stack at first floor level to create another hearth now made the heating of upstairs rooms possible.

The simple addition of an external stack onto the gable end of the building allowed both the parlour and solar to have their own hearths.

Simple ladders to upstairs rooms were replaced with tread and riser staircases, often utilising the support offered by the new brick chimney.

Glass – again a preserve of the wealthy – replaced wooden shutters and tallow-soaked linen.

Original windows were enlarged and new ones created.

Dormer windows were inserted into the roof letting in light and raising the space above the eaves.

Extensions to the gable ends or to the sides – off shoots or offshuts – accommodated kitchens, larders, store rooms, porches, and workshops.  Cross wing and rear extensions enlarged the building.

Vacated service chambers were designated as bedrooms or parlours.

Internal and external doors were blocked and relocated.

Some ground floors were excavated and lowered to increase room height and compacted earth floors were planked with elm, or tiled.

Beams were hidden by ceilings.

Brick sometimes replaced infill panels but on a grander scale it was used to completely reface outside walls. Sometimes whole buildings were refaced whilst others just the frontage.

We can only guess at the reasons but it may have been a way of emulating the appearance of the newer brick houses being built and implying higher status ownership.

It may also have been seen as an opportunity to break the never-ending cycle of refinishing, repairing, and replacing exposed timberwork and infill panels.

The Green Man in North End (pictured right) provides us with an excellent example of the use of brick facing. To read more about the Green Man and its developmental changes please see our page on wall and framework materials.

An indirect impact of brick was in the way older cottages were utilised. As the wealthier villagers relocated into new individually designed brick-built homes their cottages fell vacant.

The now empty properties were then sold or sublet and many were subdivided to create separate accommodation for two or more tenant families.

So often you see reference to a pair, or even row, of “charming cottages” that originally were one house subsequently divided. There are examples in the village of cottages being re-purposed this way including Willow Way on the High Street. Some have remained subdivided whilst others have reverted to single owner occupancy.