You are here: HomenextTopicsnextFrom the papers ....nextAttracting an Audience - two local lectures in 1889 and 1893 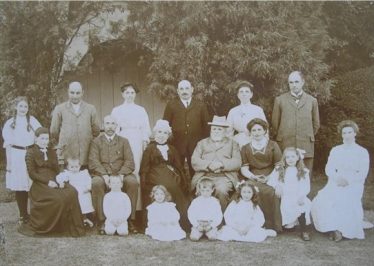 zoom
The Palmer family shown outside the summer house in Old Elmcroft, Meldreth c.1909. William Palmer is thought to be the tall figure standing in the back row on the right.
Photo courtesy of Robert Elbourn 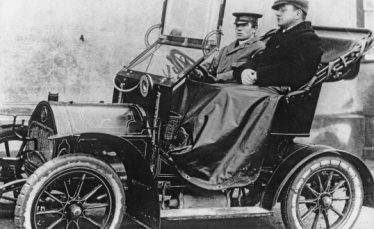 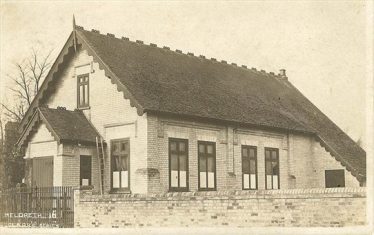 The Cambridge Independent Press of Friday 20th January 1893 reported that, ‘Under the auspices of the Mutual Improvement Society, an extremely interesting lecture was delivered in the Congregational Schoolroom, Melbourn, on Monday evening, by Mr. W. Palmer of Meldreth and Charing Cross Hospital, London.’ The subject was ‘Melbourn and Meldreth in the Olden Time.’

Note: The lecturer, William Mortlock Palmer, described in the Victoria County History of Cambridgeshire as an “antiquary’, was a well-known local historian and naturalist who practised as a physician at Linton from 1900 to 1925 and died there in 1939. The Palmers were a prominent Meldreth family who lived at Elmcroft (now Temple House) where William was born.

A large and attentive audience was present, and listened to Mr. Palmer’s remarks with evident interest. The lecturer touched on all things associated with village life in the olden time, going right back through one thousand years, or about thirty generations. The way in which justice was carried out by our forefathers provoked much laughter, especially when two men, holding the enviable office of ale testers, were fined 6d. for not doing their duty. The names of the old families connected with the two villages in days gone by were read out by the lecturer, some of their descendants being present in the room. At the close a hearty vote of thanks to Mr. Palmer, proposed bv Mr A. Howard and seconded Mr. J. Starford, was carried with acclamation.’

A few years earlier, on Monday 9th December 1889, the same paper had carried a report of a lecture given in Meldreth on ‘Socialism and Mutual Help’ which failed to attract such a healthy audience.

‘On Thursday evening an interesting lecture was given on the above subject in the Parish Room, Meldreth, by Mr. E. Orriss, of Cambridge. The chair was taken by the Rev. E. W. Cory, vicar of Holy Trinity Church, Meldreth, but the attendance was very poor. The Chairman, introducing the lecturer to the audience, said that although he (the chairman) had known them for about a quarter a century, Mr. Orris was known by some of them for a longer period even than that. When he looked upon the empty benches he felt very grateful for those who had turned out from their firesides, but at the same time if Mr. Orriss had been a stranger he should have been ashamed to introduce him to such a poor audience.

At the last lecture Mr. Bowman had suggested that he (the chairman) should call them together oftener, but his answer would be the same now as it was then: he might as well call the spirits from the deep; they would not come. Some complained that the funds were always for the Parish Room, although the debt was paid off. He might state that although that was the case there were many things that were still wanted – many little things – and they all had be to paid for.’

‘Mr. Orriss, who only dealt with portion of the syllabus as arranged, commenced by noticing a few noted socialist leaders of past years, their mistakes and failures. In our lives, and those with whom had to do, he said there were two elements, one was the element of individuality, and the other the social element….’mutual help’. Everyone should give others as much help as they possibly could. Communism was often connected with the word socialism and people often asked the difference between them. It was not easily answered. Socialism was a plan for the re-organization of society, making it over again on the principle of state ownership; to every man according to his work. Communism was every man according to his needs…..The lecturer then proceeded at some length to mention many socialist plans that had been tried in the past, giving explanation of them and exposing their fallacies…..’

Despite the poor attendance and the length of the address, we are told that Mr Orriss was ‘listened to with much interest’. During the interval ‘Miss Cory and Miss Harradence favoured the audience with several solos, which were much enjoyed’.