You are here: HomenextTopicsnextFrom the papers ....nextCash Taken in Village Ram-Raid 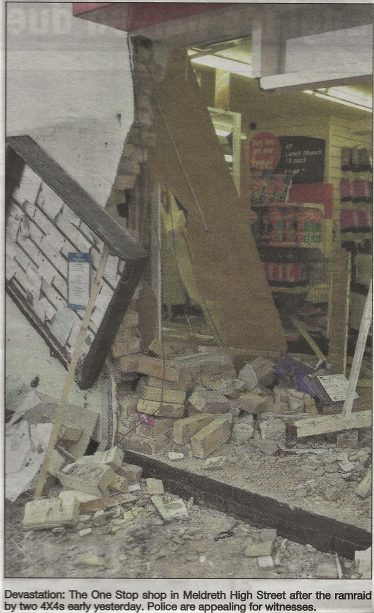 zoom
The One Stop Shop in Meldreth High Street after the ramraid by two 4x4s on 19th January 2005
Roger Adams, Cambridge News

The following report appeared in The Cambridge Evening News on Thursday 20th January 2005.

Ram-raiders struck at a village store and stole a cash machine.

The target was the One Stop convenience store in Meldreth’s High Street and police believe two 4×4 vehicles were used to smash a way into the store.

It is not known how much cash was in the machine.

As reported in later editions of yesterday’s News, a vehicle believed to have been used in the incident was recovered from the scene by police.

Police were called shortly after 4.30am yesterday and are appealing for witnesses to the incident.

A spokeswoman said: “I would appeal to anyone in the area around this time who may have seen something to contact police. It is believed that two vehicles, described as 4x4s, may have been used in this incident.

“Any information, no matter how small or insignificant you believe it may be, could help this investigation.”

One of the 4x4s, a green Chrysler estate, has been recovered. It had been stolen from Haslingfield overnight.

Police from Cambridgeshire, Hertfordshire and Bedfordshire are now working on the case.

Judy Frost, who lives next door to the shop, said: “It’s the audacity of these people that I cannot believe; it’s a terrible thing to happen.

“I heard a noise but for some reason I thought it must have been some kind of trouble at the pub (which is also in the High Street) so I was looking out of my window towards there.”

Another High Street resident added: “The post office has already been raided and now this – it’s awful.”

The shop, which contains the post office, was raided in November last year. One shop employee, a 59-year-old man, was hit over the head with a crowbar by masked men who stole £2,000 from a cash drawer and £30,000 from a safe.