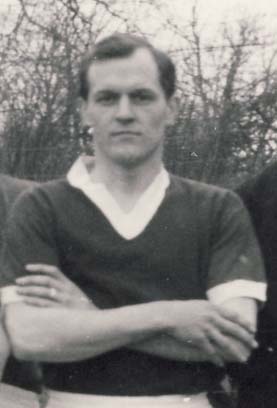 The Atlas ground was very special and all local cup finals were played there. It had a super pitch which was roped off and had a grandstand, changing rooms and showers. The goals had a boarding at the back of the net which gave a satisfying sound if the ball hit the board when a goal was scored.

Jackie Woods, who had played for Cambridge Town and was an amateur international, was the captain and main goal scorer. He must have been fairly old at this time because he would often refer to me as his son.

In the Parthenon League we played such teams as Twickenham, Paddington, Addlestone, Basildon, Kings Langley, etc.  We just about held our own in the league, but our best performances were in the F.A. Amateur Cup.

Our first game in the Amateur Cup was at Huntingdon where I scored our only goal. We won 1-0.

The next game was at home against Ely City. This was a great game which we also won. The score was 4-3.

The third game was at Higham Ferrers. I remember that our coach driver got lost and we arrived half an hour late. The crowd jeered us when we arrived and became rather hostile. To everyone’s surprise we won 6-4.

On 14th November 1953 we played Dagenham at home. This game was rather special for me as a Chelsea scout was there to watch me play. We had about 600 spectators that day and everyone was keen to see us do well, as Dagenham were in a much higher league. Well, we lost 5-2 and I had a poor game.

I only played one season for the Atlas but I remember it as probably my most enjoyable.

I do not remember any photographs of the team being taken that season.