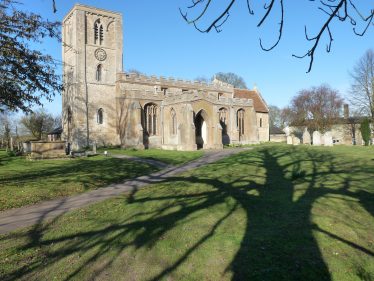 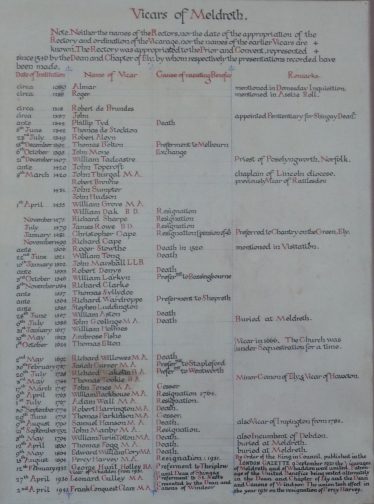 The parish church lay at the heart of a village and, with its cemetery, embodied the continuity of the community of the living and the dead.  It was the largest, and architecturally the most ambitious, building in the village, and as it was the largest covered space it was also used for various secular activities.  From the 12th century it was customary for the parishioners to have responsibility for the nave, and for the owner of the church, in this case the monastery of Ely, to be responsible for the chancel and for paying the vicar from the proceeds of the tithes.  Meldreth was not a wealthy parish, being assessed at £20 in the taxation of 1291, with the vicarage worth an additional £5 6/8.  The church is built largely of rubble, which would originally have been rendered. Good building stone, which had to be imported, is used sparingly, mainly for doors and windows.

A chapel of Our Lady formerly stood in the churchyard, though its site is unknown. Thomas Cavell, Lord of the Manor of Veseys, founded the chantry (an endowment of 74 acres to pay a priest to say Masses for the Dead) in the 1390s. In 1504 Christopher Cappe bequeathed £40 to the guild of the Virgin to provide a priest, and the last bequest to the chapel is recorded in 1527. By 1535 this chantry was worth £5 p.a.; more than the vicarage was worth at that date! The chantry would have been suppressed, along with all such chantries, in or after 1547.