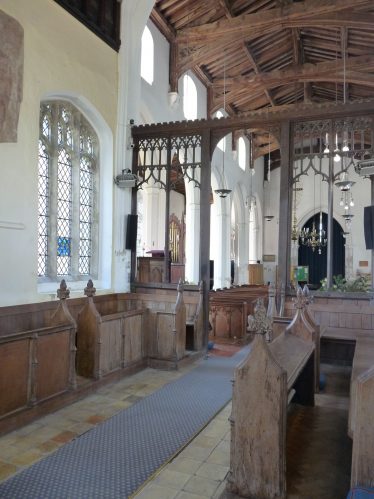 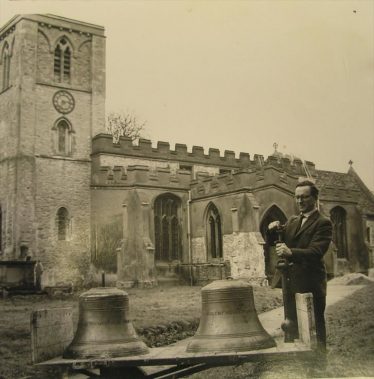 In 1066 a monasterium (a minster served by several priests rather than a monastery) is recorded in Meldreth as belonging to Ely Abbey. The church was probably much smaller than the 12th-century church and may have been of wood. The foundations are likely to be under the present church, perhaps under the chancel and thus accounting for its unusual length for the mid-12th century.

By 1086 the church was in private hands but was restored to Ely and was granted to the Priory when the bishopric was founded in 1109. In 1203 the tithe revenues of the church went to the monks after payment of the stipend of a vicar, which was confirmed at £5 in the 1220s.  The advowson (the right to appoint the vicar) remained with the monastery until the Reformation when in 1541 it was transferred to the new Dean and Chapter with whom it remained.

No document refers to the construction of the present stone church so its dating to the mid to late 12th century is dependent on the style of the architectural features, especially the capitals. What survives of the first stone church are the rubble walls of the chancel, the north and west walls of the nave, the north door, and the  tower, which was completed in the late 13th century. There would have been a font but this was later replaced.

In the 1330s or 1340s three traceried windows were inserted into the north nave wall. These can be dated by the style of the mouldings and the tracery patterns when compared with contemporary work at Ely Cathedral. The northwest window of the chancel may have been inserted around this time.

A major refurbishment of the chancel may be dated to the 1360s and 1370s on the basis of the identification of the donor of the new east window, Alexander, a monk of Ely.  A vestry was built onto the north side (datable by the mouldings of the blocked opening), and the chancel was provided with a piscina and two aumbries.  The wall paintings may also have been done as part of this refurbishment.

In the 1390s a chantry dedicated to the Virgin was founded by Thomas Cavell in the churchyard.

The Cavell chantry would have been suppressed along with the official suppression of all chantries in 1547 and the appropriation of their endowments to the crown. At the Reformation all consecrated altars had to be destroyed as they contained relics but at Meldreth this was not done until after 1561 with the medieval stone altar being replaced by a wooden table. Perhaps in connection with this, a silver chalice was given ‘For the town of Meldreth’ c.1570. Any valuable original plate would have been confiscated by the royal commissioners. The screen was very probably removed during the 16th century.

The earliest bell is dated 1617.
On March 14th 1643 the Puritan William Dowsing visited Meldreth and destroyed ‘60 (or 62) pictures in the church, a cross on the steple and 2 pictures of Christ’. On the same day Dowsing and his friends also managed to visit the churches of Melbourn, Whaddon, Bassingbourn and Litlington!

1658  Construction of the Pike monument and family chapel to the east of the south aisle.

1685  The Archdeacon’s visitation recorded  ‘the church a dove house, the windows unglazed, seats broken, the chancel in a sad pickle, holes in the roof, gravestones lie about the church and heaps of other stones’. It also recorded that the vestry had been ‘lately pulled down’.

During the 17th century an increasing number of villagers became dissenters. A Congregational Meeting House was licensed in Meldreth in 1672 but by 1694 Congregational worship had moved to Melbourn.

1759 John Wesley preached in Meldreth to a gathering estimated at c.4,000

1833? insertion of wall monument to William Mortlock and his family.

Prior to, or in, 1842 reconstruction of part of the 15th-century screen in its present form.

1840s strong opposition to the church rate because most of the villagers were dissenters (1851 a new meeting house was built jointly by Independents and Baptists in the High Street).

1838-42 New pews supported by the Incorporated Church Building Society. It may have been at this time that the south aisle, porch and the decaying stonework of the east window were covered in ‘Roman cement’. Dates of 1836, 1837 and 1840 scratched into stonework on the north door of the nave, imply restoration work. According to the History and Gazetteer of Cambridgeshire, 1851 ‘The church was thoroughly restored in 1841’.

1866 Stained glass window in the north wall of the chancel dedicated to S.Cory, wife of the Rev. E.W.Cory.

1937  New bell frame, according to Kelly’s directory for that year.

1944 – 49 Restoration campaign, including moving the pulpit by the architect Stephen Dykes Bower (1948) and the discovery of the 14th-century wall paintings in the chancel.

1952 Restoration of southwest window in the chancel to commemorate Frank Clare, vicar 1943-52.

Bells:  one was added in 1950, two more in 1967 and the final two in 1968. In addition to his generous gift of two bells in 1968, John Gipson has been responsible for the maintenance of the bells, the clock and many other aspects of the church over the past 50 years. His remarkable commitment was recognised in 2009 when he was a finalist for the national award organised by Country Life and the Church of England entitled  ‘Unsung Heroes of the Rural Church’.