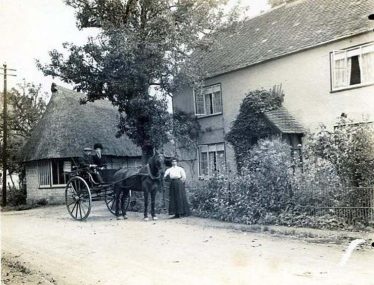 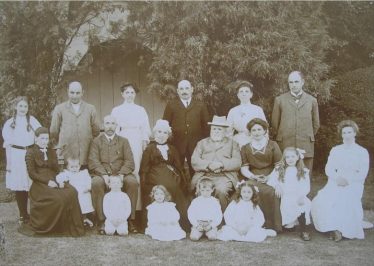 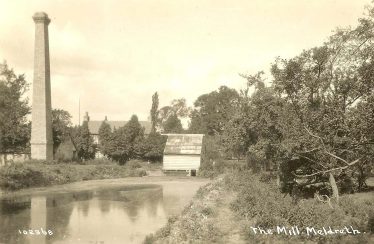 zoom
The chimney and wheel housing at Flambards Mill, after the main building was destoryed by fire
Bell's Postcard supplied by Ann Handscombe 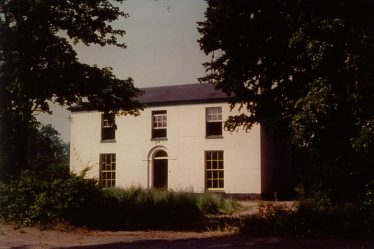 Elmcroft (now Temple House) was bought in 1695 by John Palmer for £263. The house was then known as ‘Blacks’ and had a stock yard at the back. John was a farmer and butcher and his son George carried on the tradition with a shop in the front room by the road. He supplied meat to the locals and also sent meat to London by pack horse as the roads were too muddy for carts or wagons to get through! During the Black Plague in London the money he was paid was left in a trough of vinegar, presumably to disinfect it.

George’s daughter Molly, was a great character and lived to a great age, and it was late in her life that the butchery business ceased. The property was left to her great nephew, George, at Orwell, who came to Meldreth to live and also bought ‘New’ Elmcroft (now White Gates) and nearly opposite to Temple House. Bertram Palmer, the local fruit grower who planted many of the orchards at Melbourn and Meldreth, Collis Palmer who farmed Lordship Manor at Melbourn, George Palmer who bought Sheene Manor, Meldreth, and was a farmer, William Palmer the noted local historian and naturalist, also as Linton Doctor he was well known over a wide area doing his rounds in a dogcart, these men and their three sisters who lived at White Gates until the 1960s were all born at Temple House.

Ivydene or the Pump House

Next to White Gates was Ivydene (now the Pump House). This was the Elbourn Family stronghold until they moved to Chiswick House. A brother and sister Palmer married a sister and brother Elbourn in my generation. Beyond Temple House on the same side of the road lay a larger house, home of the Ellis family. They were noted village personalities and landowners. They owned Flambards (Driver’s) Mill and the mill grounds adjoined the Elbourn stockyard at Ivydene. The Elbourns were staunch ‘Liberal’ and ‘Chapel’ while the Ellis’s were ‘Church’ and ‘Tory’, and in a small village at the turn of the century this was quite a division without the aggravation of being neighbours too. Alfred Elbourn was always having quarrels with [Charles] Ellis. [1]

On one occasion they had a mud-slinging match. The dispute was over the ditch that lay between the two properties. Alfred would block the river end of the ditch until he needed water for his cattle in the stockyard, then he would undam it to let the water flow freely from the river. This temporarily lowered the river level and upset the working at Flambards Mill. [Charles] was not very pleased and both men resorted to hurling mud at each other! In the next generation Percy Elbourn and Captain Hubert Ellis also had their differences but both ended their lives as friends.

The mill was burnt down in 1910 and I can remember going to see the flames. My father (Percy Elbourn) knocked down the burning beams so that they fell away safely from the assembled crowd. The ruins stood for years and eventually the derelict grounds were a natural adventure playground for children of later generations.

Captain Ellis was a keen cricketer and set up practice nets in the Mill grounds. He would get any willing lad including myself to bowl at him.

The first car in the village was a Straker-Squire and was owned by the Ellises. It seemed to be all brass fittings and headlamps. Hubert cannot have had an easy life as he married a daughter of old Mortlock of the The Court. She was rather odd and would wander round the village muttering, particularly at night and carrying a lantern. The local kids were all terrified of her and would cross the road rather than pass her on the path. The Ellises had no children and the Grange was left to a nephew who lived in the stables and let out the big house to Americans after the Second World War.

The Grange and its ground was sold to speculative builders in 1962, and the house demolished.  Today there is a small estate with a pleasant central reservation on the site. Flambards was also sold and the estate of that name now stands there, although a little of the mill brickwork can still be seen from the public footpath over the river.

[1]  In the original article, Charles Ellis is named as “Hubert senior”.  This is incorrect.  (Captain) Hubert Oslar Shepherd Ellis was the son of Charles Ellis (1819 – 1897) and Maria Louisa Ellis (nee Oslar).

This article first appeared in “Drifts” Magazine in July 1982.