You are here: HomenextPeoplenextFuneralsnextDeath and Funeral of Mr John Reed 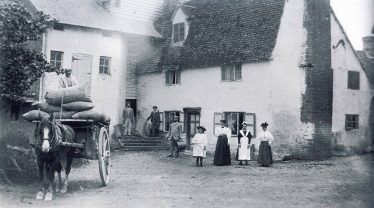 zoom
John Reed (on the cart) is pictured with the Peters family outside Topcliffe Mill, c. 1890
Photograph courtesy of Mary Course

The following report appeared in the Royston Crow on 6th August 1926.

The passing away of Mr John Reed, of Meldreth, at the ripe age of 87 years, on Friday 30th July, removes one of the oldest inhabitants of Meldreth.  The deceased took to his bed just three weeks prior to the day of his death.  He had been a wonderfully active man, and could be seen about the village every day, and he always had a cheery word for those he met, and a bright smile for all.  He was for many years employed by Messrs. Adcock and Sons at the [Topcliffe] Mill, Meldreth, and was a very valued servant.  He was one of the oldest members of the Baptist Chapel at Melbourn, joining as a member in the year 1859.  He was a regular attendant up to 12 months ago, his last attendance being on the first Sunday in July of the present year.

The funeral took place on Tuesday at the Baptist Chapel, the Rev. W R Foster officiating.  The coffin was borne by four members of the Chapel, Messrs. R Stanford, F Holland, F Abrahams and J Dodkin.  The organist, Mr F A Winter, played the Dead March as the funeral cortege left the Chapel for the grave, which had been beautifully lined with ivy and white flowers by friends of the deceased.

The body was enclosed in a polished elm coffin with brass fittings, and on the breastplate was
John Reed
Died 30th July 1926,
Aged 87 years.

The funeral arrangements were carried out by Messrs. Hale Bros. of Meldreth.