You are here: HomenextTopicsnextCommerce and EmploymentnextPublic Houses and Brewery in MeldrethnextBill Wing's Memories of the Railway Tavern

Joyce and Bill Wing's memories of the Railway Tavern (1 min 58 secs)
A transcription of this audio clip can be read beside the photo. 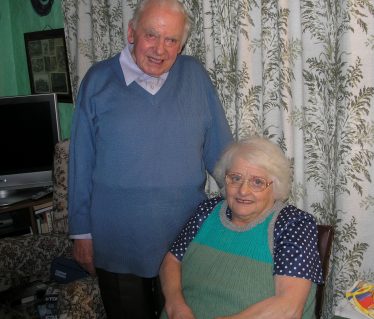 Click on the ‘play’ button on the adjacent audio bar to hear Bill and Joyce talk about their memories of the Railway Tavern.

Our favourite pub was the Railway Tavern.  We used to play darts in there.  We used to have a candle on the side of the dart board.  Ben used to come in there in the winter time, he used to have three lumps of coal on a little old shovel and he’d put one on the fire and take the other two back!  This was the Tap Room and there was no bar but there was a tiny passageway with a room right opposite the door where you went in and got the beer.  There was also another room which was the Saloon Bar which was used mainly by the women but men on their own used the Tap Room.  Sometimes you could hardly move in there. Smoking was allowed then and before the War we used to get a pint of beer and a packet of 5 Woodbines for fourpence [2p].   After the war it was two shillings [10p].  I used to drink Mild and Bitter.