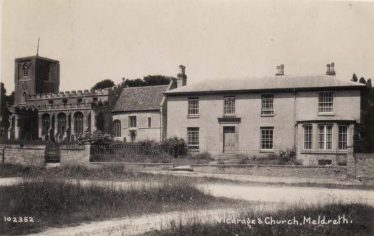 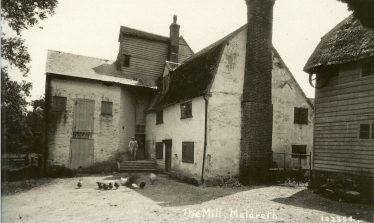 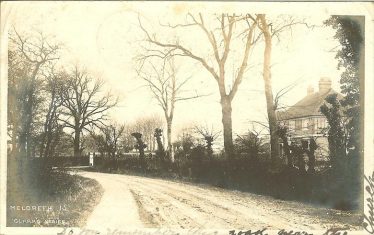 During the Second World War a number of children were evacuated to Meldreth from the London area.  Below are extracts from letters that have been received from two of the evacuees.  The first was written over 25 years ago, the second in 2006.  Also printed is an extract from a reply to the second by John Gipson.

I was evacuated from Raynes Park County Grammar School, near Wimbledon, with the school scout troop during the first year of the war and we camped in a field behind [Topcliffe] mill next to an orchard.  This arrangement was through our Headmaster, I think his name was Wright, who was an old friend of a Mr Jebb who lived in an ancient house [the Manor House, now Meldreth Manor] near Meldreth.  We had to further our education by attending play readings and discuss literature with this very old thin gentleman in his extensive library. In retrospect I believe the Headmaster must have either been brought up in Meldreth or had relations living there, as he seemed well known to the residents.

Next to the mill there was Stubbins Stud Farm and Mr Stubbins had four daughter, Sylvia, Mary, Joan and another, who captured the interest of some of the older boys.

There used to be an American Air Force base at Whaddon and after the night raids the Flying Fortresses could be seen landing.

As winter approached, we moved from tents into the Nissen huts in the grounds of the vicarage opposite the lane that leads down to the mill.  Fortunately, we no longer had to wash every morning in the mill sluice since water came out of taps, but curiously discoloured and smelling strongly of sulphur.  When we first arrived, the mill sluice was very overgrown with nettles and completely silted up and it was a painful process to remove the nettles before we could dig out the accumulated silt.  In those days the water wheel was derelict, but only a few of its paddles were missing.

Inside the mill the steps up to the first floor were worn very thin and the hand rail was a stout rope. The mill stones were still in existence, but I was never able to follow the milling process although it was explained to us on one occasion.

I remember that the lighting inside the mill was by shuttered lanterns which still hung from the beams and there were wooden pulley blocks and coils of rope lying about the floor.

We were told that a bomb landed in the stream by the mill pond and brought down a large tree which fell across the top of the house.

As a great privilege we were permitted to ring the church bells on Sunday, and it was a frightening experience to be in the belfry during this operation.

Outside Meldreth Vicarage stands a small group of boys in their very early teens.

They have grey blankets draped around them so that they look like monks.  They form into a short column and march at a leisurely pace in the direction of the station.  About half an hour later the column re-emerges with a train of even smaller boys carrying their personal possessions.  One of the monks takes the role of a mendicant, begging alms from the newcomers.

This is what a passer-by might have noticed early in September 1944.  The Army (or perhaps the RAF) had taken over the Vicarage earlier in the war and had erected a small group of Nissen huts in the grounds.  Their occupation had not lasted long.  The boys were strangers to the village and could accurately be described as evacuees.  They were all pupils of a Surrey County School (what would now be described as a State Grammar School) situated in Raynes Park, just south west of London.

In 1944 Hitler unleashed the first wave of his unmanned flying bomb attack on London.  These were the VIs or doodlebugs and they had a fair success both as destructive weapons and from a propaganda point of view.  Certainly the boys at Raynes Park were spending time in the school shelters and some had been bombed out at home.  But the V1 warheads were relatively small and they could very literally be seen and heard as they left their launching sites right up to a few seconds before detonation.  But Wernher von Braun the technical genius behind the German programme had a much more powerful card up his sleeve.  The first V2 rocket arrived without warning from the stratosphere above London on September 7th 1944 but intelligence that such an attack was about to come was widely available and the school decided to take avoiding action.

In early summer three groups were formed: one went to Woodhay in Berkshire, one to a school near Salisbury and the third to Meldreth.  The author was one of the thirteen year old monks and the smaller boys we were collecting had come from Salisbury where the school wanted its accommodation back.

Although we had the use of both the Vicarage and the Nissen Huts, boys were accommodated strictly in the latter.  We slept in two of them – I was in the Monkey House – and a third – the Lions’ Den, was our refectory.  The Master in charge of the Meldreth outpost was the Scoutmaster of the school troop and a Baden-Powell regime was installed.  The very first arrivals were scouts who camped in a field opposite the Vicarage and did some preparatory work.  They dug the latrines.  We all did fatigues in the cookhouse (run by Joy, the intriguing elder sister of one of our number) and were periodically sloshed over while standing in a dustbin in the old stables as a gesture towards hygiene.

At small boy level I cannot say that there was great fraternisation with the village but we certainly played our part in the life of the church.  Mr Dainty, the organist, suddenly had a willing choir of boy sopranos, plus a few growlers with broken voices.  The organ (sans electrics) got pumped vigourously on Sunday, and it was a frightening experience to be in the belfry during this operation. The Vicar had just discovered a mural – or the remnants of one – on the north side of the choir and went about a little amateur restoration.  He assured us he knew what he was doing, which was spraying it with skimmed milk, but I personally thought this was a waste of a valuable food substance.

Mr. Dainty was an ex tea planter and occupied a desirable Edwardian house further up the road in which he had a very grand piano.  Those of us who claimed to be music students had the use of the piano (by arrangement) and I made good use of the occasional escape from the jungle.

One of our number, now a retired BBC producer, recently vouchsafed to me that he saw a ghost in the church: a hazy figure emerging from a door at the foot of some steps leading up to a rood loft, he remembers.  Is this a known phenomenon?

Your letter has been passed on to me as a “Golden Oldie” from Meldreth.  I was born in the British Queen pub, which my parents kept for over 60 years.  My brick cottage is almost opposite the British Queen.

I was called into the army in 1944 but I do remember some children from Raynes Park.

After being called up I eventually landed in India for 10 months before moving into Burma.  I was one of the lucky ones; the atom bomb dropped whilst I was in Rangoon.  Later on I moved to Mandalay – “no flying fishes” – where I ran a workshop unit for about 250 members of the Indian Army.

I knew Mr and Mrs Dainty very well. I was in the choir and he was a very good choirmaster.  We too enjoyed his home with biscuits and cocoa.

Mr L Galley was our vicar then and I am still in contact with his son Giles who is a retired vicar living in North Yorkshire.  I learned to ring the church bells after they were restored in 1936.  There were five then but now we have eight!  I have recently retired as churchwarden after 35 years but still ring the bells.