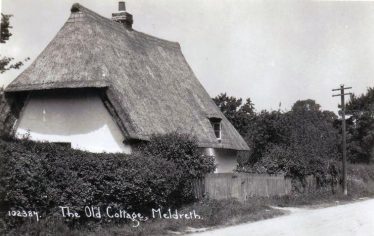 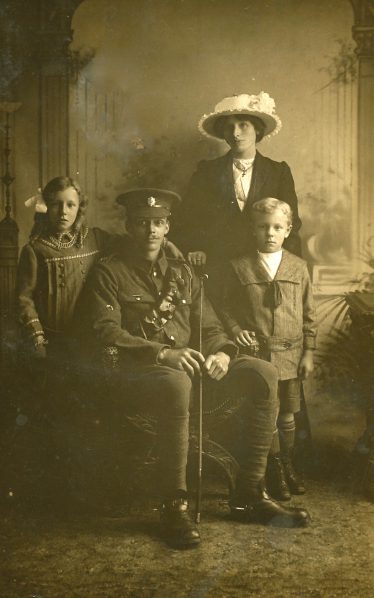 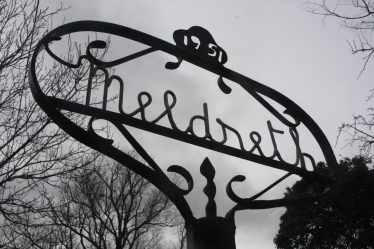 zoom
Meldreth Sign, made by Percy Cox, 1951 to commemorate the Festival of Britain
John Crawforth March 2014

Percival (‘Percy’) William Cox was born in 1884 at Applecote Cottage on the High Street in Meldreth. He was the elder son of Amos Cox, a blacksmith who originated from Haynes, near Ampthill in Bedfordshire and Emma Letitia Cox (formerly Mead), from Meldreth.

He had a younger brother, Joseph (‘Joe’), born in 1892, and an younger sister, Norah, born in 1886. Joe, like Percy, saw military service during the War; he survived the conflict but died of tuberculosis at the age of 35. Nora married Harry Miller in 1908 and they ran “The Sailors Return” public house in North End, Meldreth, later moving to Histon, Cambridgeshire.

Percy Cox grew up in Meldreth and became a blacksmith, as his father had done. He was employed by Hales Bros and in his war record there is a reference from the firm prepared in 1915 when he enlisted in the army. It says that he had been in their employment for 12 years and describes him as “a very good Shoeing Blacksmith.”

Percy Cox had married Charlotte Elizabeth Pateman in 1907. They had three children, Mona, born in 1907 and Leslie Jack (known as Jack) in 1909. Sadly, Charlotte died giving birth to their third child, Nora, in 1913. Nora herself died in early infancy. Percy married again in July 1915 just two weeks before he enlisted in the Army. His second wife was Sarah Elizabeth Cox. They had a daughter Gladys, born in 1914 and known as Gladys Symonds. Another daughter, Peggy, born in 1923, is now 91 years of age and lives in Ipswich.

We know little detail of Percy Cox’s war record. Initially he enlisted in the Army Service Corps, aged 31 years 6 months, probably because of his occupation. He embarked for France from Southampton on 17th September 1915, arriving the following day at Le Havre. His granddaughter, Judy Murray, recalls that he served as a Farrier and was later in the Hertfordshire Regiment. He was at Ypres. He was granted 28 days ‘furlough’ pending his final demobilisation on 12th May 1919.

When Percy was first married he and his wife lived in a cottage next to Hales’ Blacksmiths. After he left the army he had a forge behind the British Queen; then, after a few years, he went to work for Eric Elbourn as a blacksmith and farrier in what was known as Elbourn’s Yard. The work premises were situated just off Whitecroft Road at its junction with Chiswick End, approximately where 1a Chiswick End stands now. Judy remembers watching her grandfather shoe the shire horses from Howard’s Farm in Chiswick End. When her grandfather was working for Eric Elbourn he lived over the station hill, where the A10 flyover is now, in a cottage owned by the Elbourns. She recalls that it was “in an apple orchard and in the Spring it was full of snowdrops, primroses and violets.”

Don Elbourn, father of John Elbourn who lives in Chiswick House, Chiswick End, ran a road haulage business and repair shop, together with a forge. He employed Percy’s son Jack, for many years. John Elbourn recalls that his father taught Percy’s son Jack to drive a ‘steam-driven lorry’ – the first in the district – and that on one occasion he managed to knock the front light off someone’s bicycle without injuring the rider!

Before Percy Cox retired he made the ornate, wrought iron Meldreth signs that marked the village boundaries. There is one on the road from Shepreth and another on the approach from Melbourn, outside Sheene Mill. They were made in 1951 to commemorate the Festival of Britain.

Judy Murray recalls that her grandfather worked until 1959. He remained active after his retirement, gardening and carrying out odd jobs around the house. He made her a horseshoe which he presented to her and her husband on their wedding day. He was the last blacksmith to work at the forge before it closed.