Keith Jacklin remembers the Blacksmith and Tinsmith (1min 57sec)
A transcription of this audio clip can be seen at the bottom of this page. 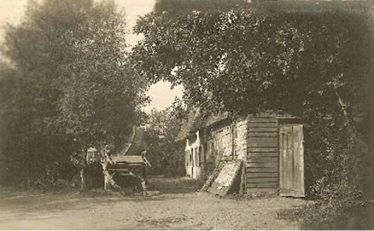 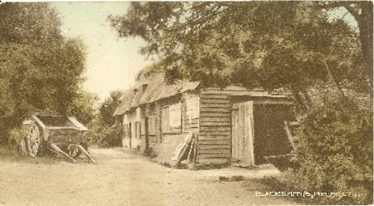 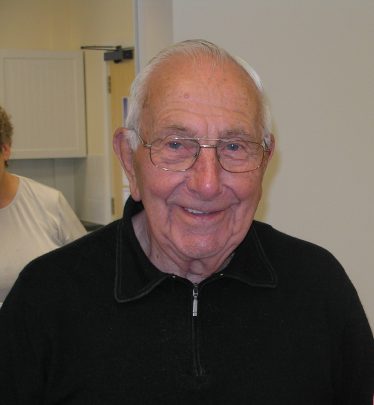 zoom
Keith Jacklin remembers the village blacksmith. Click on the audio link at the top of the page to hear Keith's memories.
photo by Tim Gane

In the late 19th century blacksmiths and wheelwrights were very important tradesmen in the area particularly around Meldreth, due to the prominence of farming as the main industry.  Most villages had more than one wheelwright and from viewing the census from 1841 to 1901 it shows that they took on many other useful trades as well. As blacksmiths they maintained the tools of farming, horse-drawn carts and later mechanical vehicles. They repaired wood and metal, made coffins, acted as undertakers ,(Ref 1898) repaired the church and supported the community generally.

This page concerns the Hale family. There is information elsewhere on this site about another Meldreth blacksmith, Percy Cox.

It is also apparent that during the late 19thC and early 20th century one family, the Hale family prospered, not only owning their own business in North End, but also other property in the village. The family were first recorded as being wheelwrights in 1837 in Kelly’s Directory of trades/businesses. Due to economic reasons and a move to petrol driven cars and machinery, their work decreased and in 1939 Herbert Hale was appearing in the Receiver’s Court in Cambridge. On reading the report it shows that his business went into decline in 1934 and he closed it in 1936.

The site may have been used as the blacksmith’s forge before the 13th century when North End was a separate settlement within Meldreth.

By 1837 Benjamin Hale was working as a wheelwright in Meldreth and living in Meldreth near the church. Benjamin was married to 21yr old Sarah (born in Wisbech). His parents were living further down the road in The Sailor’s Return public house where Edward is later listed in Kelly’s Directory as being the publican in 1847.

On the 1820 enclosure map the land used for the site of the forge is seen to be owned by Phillips and Co. Royston.  The population of Meldreth would have been approximately 643 in 73 houses in 1831. There was also a blacksmith called John Fordham (aged 50) living in the High Street in 1841.

‘Meldreth’ one blacksmith and wheelwright situated at the Old Town House was very flourishing in the early part of the century before the advent of farm machinery and motor cars. One could usually see several horses waiting their turn to be shod and usually some children watching the sparks flying off the anvil’

After the death of Mr Herbert Hale in 1947 came the end of one of the village’s old crafts. The blacksmiths and wheelwrights business was founded in 1836 by Benjamin Hale. His three sons followed in what was a thriving business, one could frequently see several farm horses waiting their turn to be shod and the farm wagons waiting for new iron runs to the wheels. The smell of horseshoes being fitted when beer was being brewed in the brewery close by, was unbelievable. Mr Herbert Hale, the last of the brothers had an unbroken record of 50 years as Church Clerk there were tales of the various instruments played before the old barrel organ was installed.

Another interesting fact about the house and the Hale family, was in relation to the old postal business which was carried on in the room next to the Smithy by Miss H Hale ( Henrietta) and her mother Elizabeth (both unmarried). It was the time of Morse code for telegrams and letters brought by horse –drawn mail carts from Cambridge. One of the Hale brothers was the postman.

After 1947 a nephew lived in the house for a short period when it was modernised and the Old Smithy part demolished. It was then named the Old Town House and it was put on the market for sale.

Keith Jacklin’s Memories of the Blacksmith

Click on the sound bar on the top of the page to hear Keith Jacklin talking about his memories of the village smithy.

As boys of course we were always let out to try to help them and watch them.  We used to stand there and watch them shoe the horses and help them put the metal rims on the wheels, the cartwheels. They used to keep these great big wheels up there and someone put them over there and then they had to knock it down and we were allowed to pour the water around to shrink them.  We used to stand there and turn the grindstone for them and sharpen all the tools.

The tinsmith was a Hale, Arthur Hale.  There used to be two cottages joined to the blacksmith’s shop, well the house that’s there was two cottages, and he lived in the far end one.  He used to mess about mending kettles and things like that.  If you had a leaky kettle he’d put you a bolt through with two washers on the end and all that sort of thing but he always wore a hat with no brim, a bowler hat with no brim.  He was quite a character.