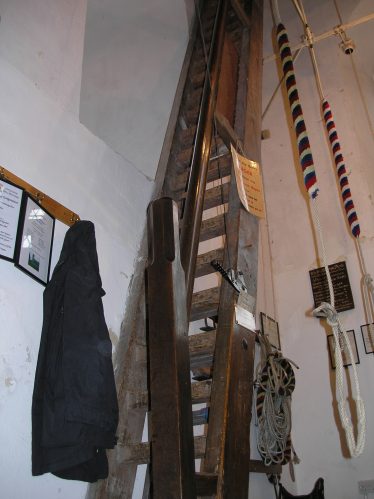 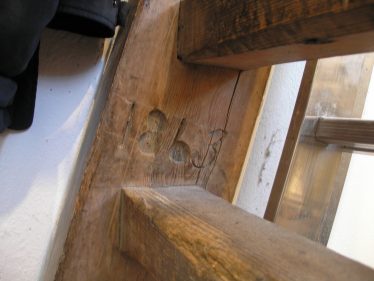 zoom
The ladder, with its date of 1863
Photograph by Tim Gane 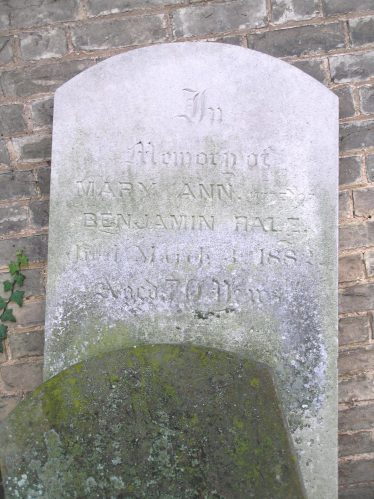 By the early 19C Edward Hale, a carpenter born in 1778 in nearby Therfield, Hertfordshire married his wife Eleanor (from Meldreth 1781-1867) and may have lived initially in Shepreth as their first son Benjamin was born there in 1814.  He was baptised in Holy Trinity Church, Meldreth on 10th July 1814.  Edward may have moved to North End in Meldreth between 1814 and 1830.

In the Census of 1841 a young Benjamin Hale and his young wife Sarah (from Wisbech) is living in the Smithy, North End, working as a wheelwright. The population of Meldreth was 730 in 1847.

Next door is the Day family with 4 children. One of the children is called Benjamin Hale Day. His mother, also Sarah, was the sister of Benjamin Hale.  She married a James Day in 1833.

In the adjoining property his father Edward Hale is living with his wife Eleanor and son William (agricultural labourer, aged 20)

In Kelly’s Trade Directory of 1847 Edward Hale is listed as being the landlord of The Green Man public house.

The 1851 Census shows Benjamin Hale, with his wife Sarah, is still working in the Smithy in North End. They have 2 children, Elizabeth, born in 1844 and Arthur born in 1848. This would have been at the time of the railway coming to Meldreth in 1851. Agriculture was the main industry plus the beginning of the coprolite industry so blacksmiths were in demand.

In 1851 Edward and Eleanor Hale are now living nearby in the Day family home. James and Sarah Day are no longer there although 2 of their sons Edward (age 17) and Benjamin Hale Day(age 13) live with their grandparents.

In 1858 Benjamin Hale is listed in Kelly’s Directory as being a wheelwright, blacksmith and running a post office from his home. Letters were received at that time firstly in Melbourn and taken on to Meldreth for delivery. Benjamin now has 3 more children, Herbert 1850, George 1851,and Louisa 1853.

By 1859 his first wife Sarah Hale had now died and by 1861 their daughter Elizabeth Hale (16) is listed as being the housekeeper to her Benjamin. Benjamin’s mother Eleanor is still living nearby in North End with her grandson Edward Day.

In 1864 Benjamin Hale was working as Parish Clerk, wheelwright and blacksmith. He probably helped with the refurbishment of the Church in 1841 as he was very involved with church life generally. The ladder into the bell tower is known to have been made by him and is dated 1863.

By 1871 Benjamin had remarried to Mary Ann (2nd wife born in Ashwell). Four of his children were still at home aged between 14 and 22.  Two sons, Arthur and George were working as wheelwrights with their father.

In 1881 Arthur had left the family business and Elizabeth (unmarried) had now moved back to the family home with her own daughter, Henrietta (age 7, father unrecorded).  Herbert and George  were working at the Smithy with their father as wheelwrights.

In 1885 Arthur Hale married Ruth (nee Willmott, age 22) and he was working in his own right as another wheelwright in North End. They had two children. Sadly one of them, Reginald Benjamin, died in 1887 aged 17 months after a scalding accident in their home.

Extract from The Cambridge Chronicle in 1887

Meldreth — A CHILD SCALDED TO DEATH.– On Wednesday, Mr C.W Palmer, the County Coroner, held an inquiry at The Green Man, Meldreth, into the circumstances attending the death of Reginald Benjamin Hale aged 17 months, son of Arthur Hale, Wheelwright, of Meldreth. It appeared from the evidence that on Monday, the child fell into a bath of boiling water and received such severe scalds.

In 1892 Benjamin was listed as Parish Clerk and Receiver.

Benjamin died in 1897 and his second wife Mary Ann died in 1882.  They are buried in Holy Trinity churchyard.

In 1901 George Hale was working as a wheelwright in his own smithy, living next to The Grange at the station end of Meldreth High Street between Hubert Ellis and George Palmer.

The wheelwrights and blacksmiths seemed to have covered all the various areas of the village. George would probably have worked on the agricultural machinery around the area of the station.

He and his wife both died in 1919 at their home Oakville Lodge near The Grange, High Street, Meldreth within 7 weeks of each other.

Herbert Hale, son of Benjamin Hale, worked as a wheelwright in his own right just near The Warren in Meldreth in 1901.  He was married and had two sons: Hubert born in 1898 and Stanley born in 1902.  He also had two daughters, Elsie by Sarah in 1910 and another, Grace, by his second wife Grace, in 1929. Eventually he joined his brother Arthur to form a business called Hale Brothers back at the Old Smithy in North End.  Herbert was also Churchwarden at Holy Trinity Church following in the footsteps of his father and grandfather.  The business continued with the help of his son Hubert and flourished until 1936 when it finally succumbed to being financially not viable.