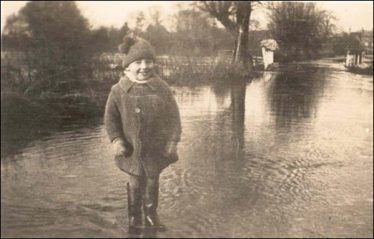 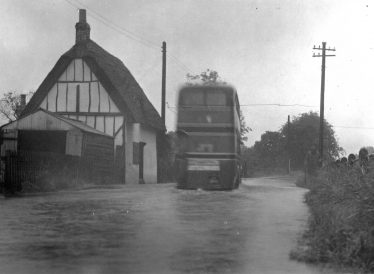 The medieval Topcliffe manorial court rolls are full of reports of flooding due to poor upkeep of mill pools, ditches and stretches of the river. Sometimes this was due to deliberate damming of the river, presumably to enhance the flow to a particular mill or ditch.

Flooding in the 20th Century

One major potential impact of the river on the village would have been flooding. We have no records of flooding until the 1930s. This may have been because the channels were well maintained by mill and riparian owners and the water meadows and osier beds operated as a sink for excess water during heavy rain. However, it is possible that evidence for flooding earlier in the century will come to light in the future.

Mr Hopkinson, who lived at the Bury, does not remember the lake flooding but on two occasions in his forty year residence the cellar flooded to a depth of one foot.

For the period from the 1930s to 1953 we are lucky that Jenny Pollock has provided a very interesting set of documents collected by her grandfather, Cyril Hagger, when he was chairman of Melbourn Parish Council in the 1950s.  These have references to flooding issues documented at the County Council since the 1930s (about a 124 letters, reports and proposals between 1930 and 1941). There is also a diagram of proposed work on the Mel to try and prevent the flooding. He estimated the cost at £500.  However, the Ouse River Board estimated £4,500 for a full scheme (the higher cost of the full scheme was due to the need to adjust several bridges). Mr Hagger suggested regrading the channel for about half a mile above Flambards Mill (called by him Burnt Mill) to give a faster flowing stream. In some ways this is what the River Mel Restoration Group have achieved in a slightly different way.

The main reasons that flooding was occurring were suggested as:

The classification of the River was one of the main issues impeding a solution. It was classified as an arterial watercourse. This meant that it was not large enough to be classified as a main river (1930 Drainage Act) so didn’t come under the jurisdiction and funding of the Great Ouse River Board. It was also too big to be managed and funded by the Agricultural Board who were responsible for ditches on agricultural land. There were some unsuccessful attempts to reclassify it with a special sub committee of the Ouse River Board inspecting the Mel and reporting back. Apparently they had to prove “agricultural importance” in order for the Mel to be reclassified and this they failed to do.

The Rural District Council (RDC) did maintain the stretch from Topcliffe to the Rhee as “an awarded ditch” i.e. the stretch downstream from where mill owners took responsibility. This is appears to be an artificial, dredged, channel.

Unfortunately the documents end in March 1953 with the position unresolved.  However, it is possible that some alteration of the course of the Mel was carried out in the late 1950s along the lines of the plans prepared by Mr Hagger as described by a Melbourn resident Sid Brazier.

A letter in January 1953 lists the following flooding and waterlogged farmed acreage estimated at 100 to 200 acres. These are probably Melbourn areas:

There was a particular problem where Station Road turns the corner by Sheene farm. Mr Joseph Andrew Pepper of Orchard Cottage, Station Road (now 61) was badly affected on a number of occasions as recorded in correspondence from his lawyer in 1952. The problem was particularly acute as Orchard Cottage was a 1662 grade 2 listed building.

Thirty local residents signed a letter dated 7th August 1952 to the Rural District Council complaining about the lack of action related to flooding.  The principal signatory was Wilfred D. Thurley of Scawby Holme in Station Road, Meldreth. As well as general flooding problems and blockage of the road the letter refers to “objectionable smells” from backed up soil drains.  We can only guess at what that meant! It also mentions a previous incident two months previously. It therefore appears that this particular sequence of flooding was during the summer, which appears to have been dry between the two floods.

The correspondence indicates a reluctance for any of the potential bodies involved to take responsibility. The parties which could have taken responsibility included:

The mill owners had taken responsibility for ensuring there was a good flow (and hence flooding avoided) while the mills were operative. However, they now disclaimed responsibility and they had no legal responsibility anyway.  In 1937 CCC served two of them notices under section 35 of the 1930 Land Drainage Act: J.W. Ward of Sheene Mill and H.O.S Ellis, who owned Flambards Mill. Ellis complied and cleared his stretch but Ward was charged £15 2s.6d for work carried out by the Council. He didn’t pay and the charge was reduced to £10 15s and 6d as the court considered that the Council had over charged.

The mill wheels and facing plates were removed in 1942 following an inspection in 1941 under the provisions of section 19 of the Agriculture (miscellaneous war provisions) Act 1940. However, this did not seem to have had much effect on the flooding problems. Some dredging work and repair of banks was carried out from central funding in 1942.

The riparian owners constituted a particular problem as there appears to have been no compulsory powers to force them to contribute and it was virtually impossible to get them all to agree. Also, as the proposal was for a one-off scheme without ongoing maintenance, the problem was likely to recur. There was an attempt at a voluntary scheme in 1947 which failed and again in 1953. In 1948 the Ministry of Agriculture did offer to fund 50% of the works but the rest would have to be funded by the riparian owners. This was not accepted.

In 1948 it was proposed that prisoners of war should clear the river. This had happened in in August 1918 under the Defence of the Realm regulations. The prisoners worked on the whole length, even damming and diverting the course of the river so they could clear the main channel, deal with over hanging vegetation and repair banks. The silt was thrown out at the sides. However, in 1948 this proposal was turned down by the Ministry of Agriculture as it was considered that it would relieve the riparian owners of their responsibility and would not guarantee ongoing maintenance. There was concern that letting off the riparian owners in Meldreth would set a precedent as there were similar problems around the country. A letter from the Ministry of Agriculture to the then MP (Mr Howard) in 1952 states that this is a “country-wide” problem and therefore “special arrangements” cannot be made in this case.

At a meeting at the Ministry of Agriculture in 1948 the County Council explained that the riparian owners were unlikely to all contribute to a voluntary scheme for two main reasons: (a) a substantial part of the problem related to agricultural land some distance from the river banks and (b) there was a large number of small riparian owners with land on both sides of the deeper parts of the river which did not flood. The Ministry agreed that the position was most unsatisfactory.

This appears to only include land owners between Sheene Mill and Flambards Mill. Mr J.W.Ward of Sheene Mill was also asked to contribute.

There was a government report published in 1951 on land drainage issues: The Heneage report. Nothing had been done about it in 1959.

A report in 1941 by an inspector from the Ministry of Agriculture says: “I have read through the Cambridge County Council’s file in connection with this river and since 1930 no less than 124 letters and reports have been written; notices have been issued and police action resulting in one conviction, but after all this the situation remains unchanged”.

The last letter in the sequence states: “It is very disappointing that the Agricultural Executive Committee are now trying to throw the responsibility for preparing a scheme back upon the County Council. The letter appears to be somewhat contradictory. In the second paragraph it is stated that the committee agree that the County Council cannot make use of their powers to prepare a scheme under Section 52 of the Land Drainage Act 1930 while consideration is being given to the constitution of an Internal Drainage District, and yet in the penultimate paragraph the committee are pressing the County Council to prepare a scheme for submission to the riparian owners.”  The letter continues in this vein and most of the correspondence is related to trying to find which body, or the riparian owners, should take responsibility for the problem.

A link to the document containing the correspondence shared with us by Jenny Pollock at the bottom of this page.

Sid Brazier who lives in Rose Lane, Melbourn remembers the river being cleared out in 1953 between the playing field and Flambards Mill.

It is possible that the problem was only solved with the impact of the bypass drainage systems and the fall in the level of the river due to increased extraction. One of our informants said that it is now a “warded waterway” (I can’t find a definition of this) and that he has to keep the land clear so that South Cambridgeshire District Council can come in to clear it.  He said that they had done this twice in the last ten years.

A Melbourn resident remembers that “The Meads”; the area between the station and Sheene mill was not suitable for arable crops until the revision of the drainage systems with bypass because it was too wet.  It was used for grazing horses.

The land behind Sheene Manor on Station Road was described as being very wet.  It was planted with willows for cricket bats at the time of the bypass construction, which may also have helped alleviate the flooding problem. They were replaced by Italian alders and poplars when the willows were cropped.  Hardwood species did not flourish because the ground was so wet. However these were felled in 2019 and (as at November 2019) have not been replaced.

A watercourse is any channel through which water flows, including piped water. There are now two classes: main rivers (managed by the Environmental Agency) and ordinary watercourses (which are managed by the local drainage authority). My interpretation is that the Mel is an ordinary watercourse (the Rhee is a main river). There is no separate drainage authority for South Cambridgeshire so the responsibility lies with the District Council. For both types of watercourses the responsibility for maintenance and repair lies with the riparian owners.

However, the Environmental Agency (EA) does take an interest in the river and works with the River Mel Restoration Group, for instance doing sampling of the invertebrate life in the river and the quality of the water, particularly related to the sewerage plant discharge. The EA also regularly clears the river and monitors the flow at Topcliffe Mill, where there is a gauging station.

They have the right to:

They have a responsibility to:

The riparian owners on the Mel have given permission for the Mel River Restoration Group to carry out most of the activities to ensure compliance.

The Environment Agency document “Life on the Edge” provides a detailed explanation of riparian responsibilities.

Surprisingly riparian owners are under no common law duty to clear a watercourse which becomes silted or obstructed through natural causes. However, drainage authorities may legally require them to carry out such works (although this power is not often used).

Under Public Health legislation a Parish Council may: