You are here: HomenextTopicsnextFiresnext1890 Fire 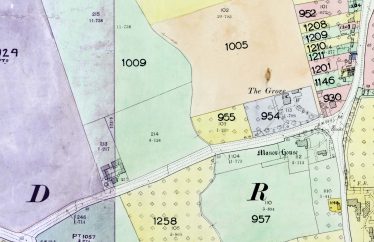 zoom
An extract from the 1910 Land Values Duties Map. Plot 1009 was occupied by Alfred Elbourn and the farmhouse itself by Frederick Waldock
Source: Cambridgeshire Archives

The following report of the fire appeared in the Royston Crow on 5th September 1890:

One of the largest fires which has occurred in this district for many years broke out on Sunday evening upon the premises of Mr Alfred Elbourn, situate on the Fenny Road [now known as Fenny Lane] between Meldreth and Whaddon, the property of Mr Herbert Fordham.  The farmhouse is occupied by the horsekeeper named Waldock, and besides the house there were the usual farm buildings and a full stackyard the result of the present harvest, with stacks belonging to Mr Medlock on the opposite side of the hedge near to Mr Elbourn’s. It appears that one of Mr Elbourn’s hay stacks had been notice to show signs of overheating and it had been watched, but apparently not opened, and about five o’clock on Sunday it was noticed by a labourer named Dash to be on fire.  He at once went to the house and called Waldock’s attention to it.


The Fight Against the Fire

The Melbourn Fire Engine was sent for and others came to assist, but the stacks being in the rough, and just ready to easily catch fire, the flames spread from one stack to another with such alarming rapidity that before anything very effectual could be done the whole place was involved, including corn and hay stacks and also farm buildings.  Meanwhile the Melbourn Fire Engine and Firemen, under the direction of Mr J Newling, had arrived, but their efforts were crippled by the bad supply of water.  To save the stacks already on fire was out of the question, and their efforts were necessarily confined to saving property not already involved by the flames.  Many hundreds of people were soon on the spot from Melbourn, Meldreth, Whaddon and all the district round, and there was no lack of workers if effectual aid could have been rendered.


The whole of the fourteen corn and hay stacks on Mr Elbourn’s premises had got hold, besides the out-buildings – stables, granary, barn, hen-house, pig-styes, etc.  There being only a hedge, dividing Mr Elbourn’s stackyard from Mr Medlock’s stacks one of these and a barn became involved in the conflagration which now presented an alarming scene.  Fortunately, before the flames reached buildings, the stock was removed, but the heavier implements, including Mr Elbourn’s thrashing machinery, could not be got out in time to save them.  Notwithstanding the large number of persons now present but little was left to do besides protecting the house and the three stacks of Mr Medlock’s which though nearer the origin of the fire than his barn and other stack, were not yet caught by the flames.  The members of the Fire Bridgae and those who assisted them were placed at a great disadvantage through the supply of water being some distance beyond the length of the hose, and water had to be carried the remaining distance.  The furniture was removed from the house which was now almost the only building not in flames, but fortunately the fire was checked at the part of the granary nearest the house and the latter was saved.

The Extent of the Damage

On Mr Elbourn’s side the fire made a clean sweep of everything – the whole range of farm buildings, extending along three sides of a square, and the stackyard – leaving nothing but the house and a small part of the granary, and a traction engine which had been drawn into position on Saturday night for drawing out the thrashing machine and elevator on Monday morning.  One of Mr Elbourn’s barley stacks had been thrashed only on Saturday, the barley sold at Cambridge the same day, and it was dressed ready to be delivered at the time the barn in which it was lying caught fire.  Particulars of the property destroyed will be found stated below:

On Mr Elbourn’s premises fourteen stacks were destroyed; six hay stacks, five wheat and three straw stacks, and represented the bulk of the present year’s harvest.  Also a thrashing machine, an elevator, a chaff-cutter, four carts, turnip cutters, etc., barn implements, the thrashed and dressed barley in the barn, and oats in the granary, and his loss must be not much less than a thousand pounds, for which amount we understand he was insured in the Phoenix Fire Office. The house and buildings, the property of Mr Herbert Fordham, were insured in the Liverpool, London, and Globe; the loss in this case being about £300.  Mr Medlock, two of whose hay stacks were burnt on the other side of the hedge, besides chaff and hay in the barn, was insured in the Commercial Union, and Mr Adcock, the owner of the barn, was insured in the Sun.  The total loss caused by thte fire would be about £1600, and it is needless to say that even if every penny were covered by insurance the disaster must still be a serious inconvenience and loss, especially to Mr Elbourn, in many ways. A piece of the granary, a lot of parched corn and the house standing alone, were all that was left of a substantial farm and stackyard. Though there was only just time to get the horses out before the buildings were in flames, no live stock appears to have been burnt, but in every other respect the devastation of the fire was as complete as could be.

The event naturally caused no end of excitement in the village of Meldreth and before the fire had burnt long an enormous crowd of people was brought together. Supt. Carlow from Arrington, and a number of the constables stationed in the district were present. The fire could be seen for a long way round and the charred corn and straw was borne aloft from the fire and carried miles.  In Royston these light pieces of ashes fell in such numbers as to be noticed lying in the street.  Large pieces were picked up on Royston Heath, and even as far as Therfield and Kelshall the black ashes were found lying about on Monday morning. Though the conflagration soon reached its climax and the buildings were all down in tow or three housrs, the stacks were burning all through the night and on Monday morning.