You are here: HomenextTopicsnextFiresnext1908 Fire 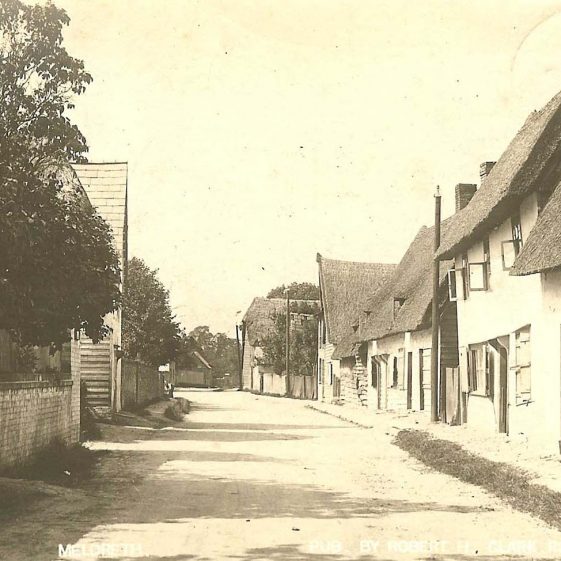 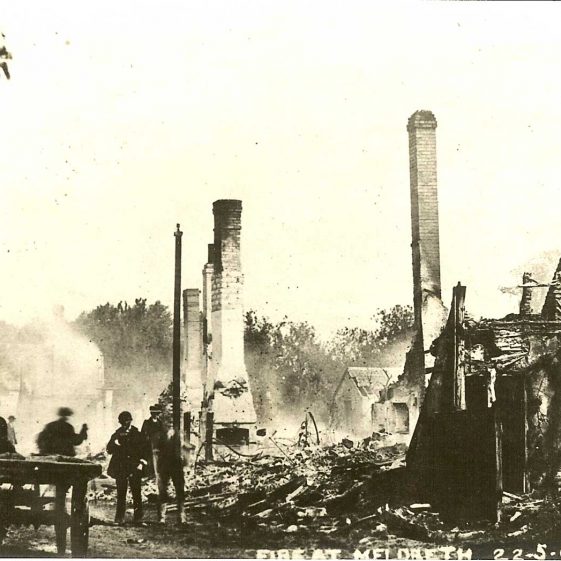 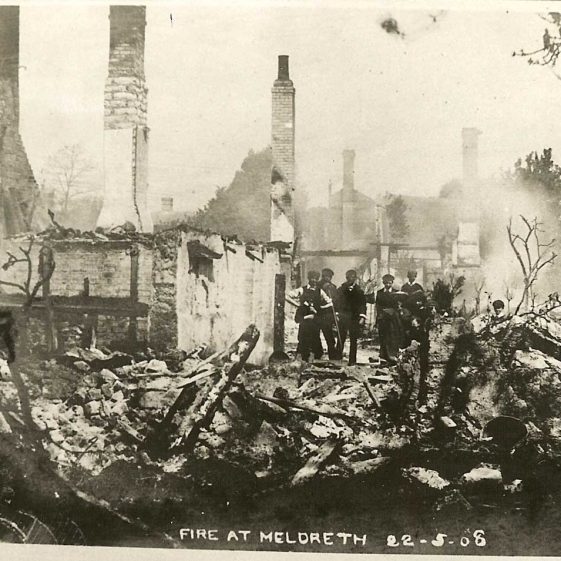 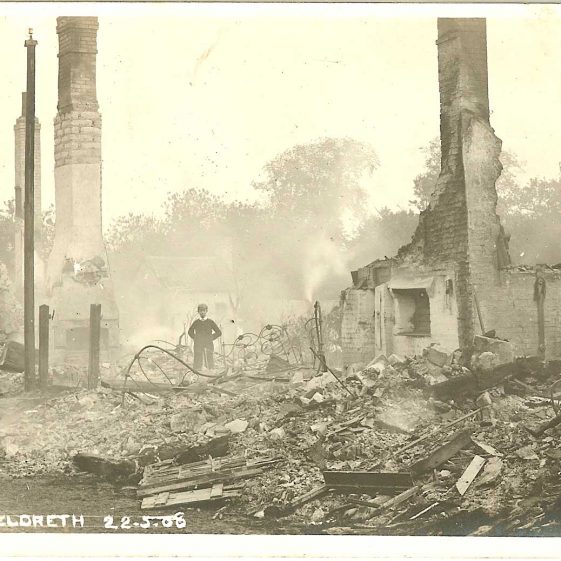 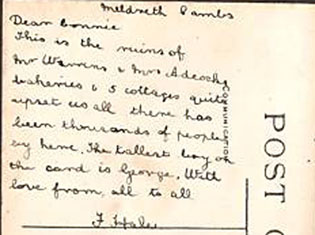 The rear of a postcard of the fire, sent by Frederick Hale
It reads: Dear Connie, This is the ruins of Mr Warren's and Mrs Adcock's bakeries and 5 cottages quite upset us all there has been thousands of people by here. The tallest boy on the card is George. With love from all to all, F. Hale

On 22nd May 1908 there was a terrible fire in Meldreth and seven cottages (including two bakehouses) were destroyed.  The fire attracted thousands of onlookers.  The fire occurred three years to the day after a fire had destroyed four cottages near Sheene Manor.

The following report appeared in the Royston Crow newspaper:

One of the most disastrous fires that has occurred in the district for many years was the one which broke out in the village of Meldreth on Friday evening last. Seven cottages were totally destroyed, with nearly the whole of their contents and six families rendered homeless.

All the cottages were for the most part composed of lath and plaster and thatched and having once got well alight, blazed with great fierceness. From the Railway Bridge at Royston a number of people watched the conflagration. The trees near by showed up with remarkable distinctness and in the glare, figures of the spectators could be distinguished flitting to and fro.

The scene of the fire is situate about a quarter of a mile from the Meldreth Railway Station on the same side of the road and where once stood trim whitewashed cottages there now only remains a wilderness of smouldering ruin from which stand up tall and gaunt blackened and broken chimney stacks.

How the Fire Started

The fire broke out in a cottage exactly in the centre of those destroyed and rapidly spread right and left. The cause of the outbreak appears to have been from the accidental setting on fire of the window curtains in the bedroom of an old lady named Jane Thriplow. The flames from the burning curtains shot upwards through a crack on the ceiling, igniting the thatch from the inside.

The old lady appears to have gone upstairs to bed about 9.30 and set her candle on a box near the window, a proceeding certainly dangerous but probably one that she had done hundreds of times before. The first to notice anything unusual was a man from Cambridge who visits the village periodically hawking paraffin. He raised a cry, which brought out Mr. East who lives opposite. Mr. East ran across to the cottage but gaining no response to his knocking, burst open the door and rushed upstairs where he found the old lady fully dressed sitting on the bed, probably almost stupefied with the smoke and exhausted with her exertions in attempting to put out the flames. She, however, refused to budge and Mr. East was obliged to carry her downstairs and out of the burning house. Undoubtedly had it not been for Mr. East’s promptitude the poor old lady would have had a terrible fate. It was the anniversary of her 65th birthday and early in the day she remarked to a neighbour that she was going to have a ‘flare-up’ to celebrate it but little thought the ‘flare-up’ would be of such a literal character as it was.

By this time the neighbours were aroused and made conscious of their danger, but so rapid was the spread of the flames and some had but time to escape with only what they stood upright in.

The Fight Against the Fire

The scene was one of great excitement and danger. Very soon after 10.15 am the Melbourn fire engine arrived in charge of Captain Newling and others. The sluice gates were opened and a good volume of water from the river was turned into the ditch about 120 yards at the rear of the burning buildings. The hose was quickly got to the water but owing to the misplaced, though willing efforts of the villagers in assisting the Melbourn Brigade, two lengths of hose were burst through being twisted and valuable time was lost. Seeing the gravity of the situation and the likelihood of the fire spreading beyond the control of the fire brigade at work, Mr Percy Elbourn rode with all speed on his bicycle to Royston, where he arrived about 10.30 am and gave the alarm to the Royston Brigade. In a few minutes Dr C W Windsor had his motor car ready and brought Captain Course and another fireman down to the scene of the fire, and these two, on the arrival of the engine and other members of the Brigade with Foreman Bedwell, were at once able to place their engine and commence pumping on to the adjoining property, a row of four cottages, the property of Mr J J Mortlock and occupied by Messrs. Farnham, Kensey, Waller and Thurley. Further progress of the fire was here arrested and although there was only a space of a few yards between these cottages and the ruins of the first one seen on the right had side of the illustration shown, the thatch of those was not in any way damaged.

The Occupants of the Properties

Looking at the illustration of the ruins as given above, the first cottage was occupied by Mr Spot Chamberlain, groom and gardener to Dr Clark, and this was the last to be involved in the flames.

A greater part of the furniture was removed but it is estimated that about £5 worth was destroyed, none of which was insured.

The next house was occupied by Mrs. Harriet Adcock, a widow who carried on a baker’s and confectionery business. Some of the household furniture was saved but a quantity was destroyed, the value of which is covered by insurance, but is not at present estimated.

Between Mrs. Adcock’s house and the next block of four cottages, was a cartway, to the left of which may be seen the telegraph pole in the in the centre of the illustration and the two gateposts.

David Jacklin, a gardener to Mr. J. J. Mortlock, occupied the first cottage, and had only recently been married. He had nicely furnished his home and just got comfortably settled. His loss, which he estimates at about £25, is not covered by insurance.

The next house was the one where the fire broke out and was occupied by the old lady, Jane Thriplow. All her belongings that were in the upper room were destroyed to the estimated value of £ 10 and were not insured. The furniture downstairs was saved.

Two cottages adjoining, and in the same row as the last two mentioned, were occupied by one family, Robert Woods. The greater part of their furniture was destroyed, valued at about £100 but this is fortunately covered by insurance.

Mr. Amos Warren’s residence and bakehouse was at the other end of the involved property, but between this and the last two named cottages, were some stables and sheds and a small farmyard, also occupied by Mr. Warren. The pony was got safely out but some of the carts and other utensils in the sheds and yard were destroyed, together with about five or six tons of coal, which lay in a heap at the rear of the yard. The coal lay smouldering, and occasionally breaking into flame some four days after the fire. In the dwelling house and bakehouse and shop everything was destroyed. Mr. & Mrs. Warren only having the clothes they were able to hastily put on. Amongst the smouldering ruins were seen charred joints of meat trom the shop. Mr. Warren carrying on a butcher’s business besides that of a baker. A number of fowls in a shed in the yard also burnt alive and these were seized upon by some of the roughest elements, who may always by found at fires, and devoured there and then. On Tuesday, after sifting some of the debris, £6 in gold and some loose silver was found blackened and discoloured. Mr. Warren’s loss is estimated at about £300 and is covered by insurance.

A number of fowls … burnt alive and these were seized upon by some of the roughest elements, who may always by found at fires, and devoured there and then.

Adjoining Mr. Warren’s bakehouse there is a small garden and beyond this there is what is known as Woolpack Farm. A long corrugated iron shed, standing with the end to the road, runs close to the boundary of Mr. Warren’s garden and some thatched buildings beyond. The farm is occupied by Mr. William Palmer, junior. Of Orwell. The wind was fortunately blowing the flames and sparks in an opposite direction to this.

The Villagers’ Effort to Stem the Flames

In the attempts to stay the raging element, the villagers worked heroically, foremost amongst them being Dr. Clarke, whose residence is just opposite the scene of the fire. In the work there were one or two narrow escapes. A young man named Earnest Barnes was during the early part of the fire on the thatch of Mrs. Adcock’s house, trying to put out the burning patches and lost his hold. His falling was noticed and broken by those nearby, who caught him and saved him from serious injury. An elderly man, Robert Woods, who lived in the row of cottages, after being got out, went back presumably for his boots and was again dragged out with difficulty by Dr. Clarke. Supt. Wilderspin and a number of constables were in attendance and rendered valuable aid to the distressed villagers. Dr. Clarke very kindly offered shelter to those who were rendered homeless and Mrs. Woods, at The Bell opposite, also gave shelter to several.

Danger from any further spread of the fire to the surrounding property was not all over until about 3 a.m. when the Royston Brigade left the scene to the care of the Melbourn firemen and returned home.

Two bakehouses having been destroyed, some temporary arrangements for the continued supply to the inhabitants of the most necessary article of daily consumption were necessary. Mr. Warren is supplying his customers from the son-in-law’s bakery at Orwell and Mrs. Adcock is being accommodated by Mr. Woods at Melbourn.

The house and bakehouse occupied by Mr. Warren belonged to the trustee of the late Mr. George Smith of Royston and the other cottages and bakehouse to Mr. 1. Grant, of Therfield.

It is a remarkable coincidence that a fire occurred at Meldreth on the same day of the month exactly three years ago. At that time the outbreak took place in daylight, about five o’clock in the afternoon, and four cottages opposite the Sheen Mill were destroyed.