You are here: HomenextTopicsnextFiresnext1901 Fire 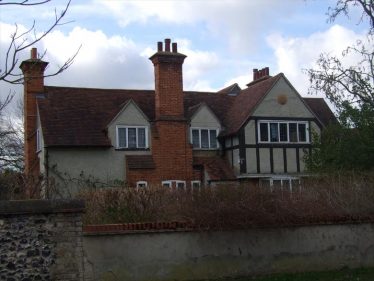 zoom
The Homestead, built in 1902 to replace the fire-damaged house of the same name

The following report appeared in the Herts and Cambs Reporter and Royston Crow on 2nd August 1901:

On Monday afternoon the village was thrown into a state of alarm by the outbreak of fire at [The Homestead] the residence of Mr A E Morley, opposite to Meldreth Court, which continued to burn and was the scene of much commotion during the whole of the afternoon.  It appears that Mr Morley, who is in the habit of attending Cambridge market as a dealer, had left home on Monday morning accompanied by Mrs Morley, no one being left in the house.

The house is an old one – lath and plaster and tiled roof – and just before two o’clock smoke was noticed coming through the tiles in the roof.  As the volume of smoke increased and it became evident that the house was on fire inside, some of the neighbours broke open the door, and an entry was effected, when the house was found to be full of smoke.  As the fire occurred just as men were returning to their work a good number of helpers were soon upon the scene, and commenced to remove the furniture out of all rooms which were accessible.

The Melbourn Fire Engine was sent for and came but it was understood the hose available was insufficient and it could do no service.  The hand pump and hose used at Mr J G Mortlock’s at Meldreth Court was brought into requisition and by this means water was thrown upon the parts of the building where the fire was situate, viz. at the end of the house next the outbuildings and farthest from the road.  The rescuers were successful in getting out most of the furniture, but in the hurry a good deal of damage was done.  Meanwhile the fire had burnt through the upper storey and the roof fell in.

Shortly before five o’clock the Royston Fire Engine was telegraphed for, and in a very short time the Brigade, in charge of the superintendent Mr E Matthews, and the foreman, Mr J Course, arrived upon the scene, and with abundance of hose they obtained a plentiful supply of water from the moat in the premises of Meldreth Court.  By this time, however, their services were chiefly required in thoroughly soaking the parts of the building in immediate contact with the unburnt portions and by 9pm all danger was over and they were able to return home.

Receiving a telegram on arriving at Fowlmere, where he called, Mr Morley drove home in great haste, only to find a scene of desolation and ruin.  the end of the house nearest to the outbuildings where the fire began was completely demolished and considerable damage was done to the other parts of the house which remain standing.  At no time did the fire burn very briskly, there being no wind, but it continued so long and had so firm a hold of the part affected that not a little damage was of necessity done to the other parts and to the furniture which had to be so hurriedly removed.

We have received the following letter on the above subject:
Sir – Will you kindly allow me through the medium of your valuable paper to express my thanks to the members of the Royston Fire Brigade and other friends and neighbours who so ably assisted at the fire on Monday last at the Homestead, Meldreth.  Owing to their untiring exertions some valuable property was saved.
Yours faithfully,
A E Morley

In 1902 John George Mortlock built another house on the same site, left, retaining the name of The Homestead.  The house was renamed Maycroft and now forms part of Maycroft Nursing Home.