You are here: HomenextTopicsnextFiresnext1905 Fire 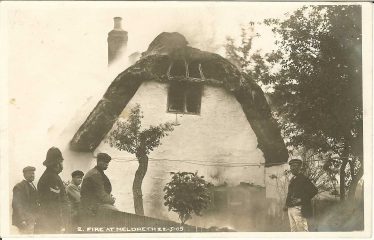 zoom
Postcard No. 2 of a series of 7
Postcard supplied by Brian Clarke 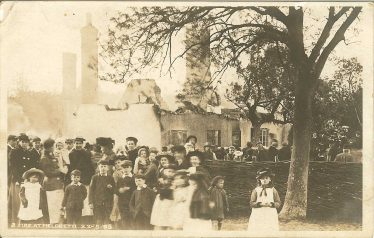 zoom
Postcard No. 3 of a series of 7
Postcard supplied by Brian Clarke 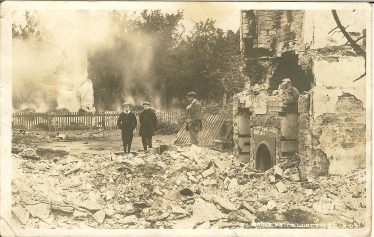 zoom
Postcard No. 4 of a series of 7
Postcard supplied by Brian Clarke 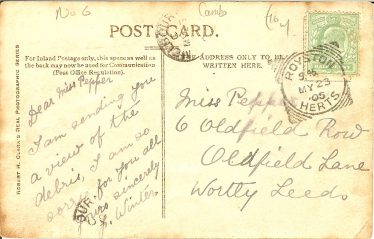 zoom
The rear of postcard No. 4 of a series of 7. The postcard is postmarked 23rd May, the day after the fire. It reads, "Dear Miss Pepper, I am sending you a view of the debris. I am so sorry for you all. Yours sincerely, F Winter."
Postcard supplied by Brian Clarke 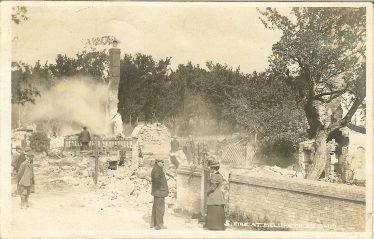 zoom
Postcard No. 5 of a series of 7
Postcard supplied by Brian Clarke

The fire occurred on 22nd May 1905 and the following report appeared in the Herts and Cambs Reporter on 26th May:

On Monday evening an alarming outbreak of fire occurred at Meldreth which resulted in the total destruction of four cottages and the greater part of their contents. The cottages were all thatched ones and were situate close to the road leading from Melbourn to Meldreth Station, on the opposite side to Sheene Farm, and were occupied by Mr Thomas Sell, Mr Joseph Pepper, Mrs Negus and Miss Brushett.

About five o’clock in the afternoon Mrs Chapman, who was doing some washing for Mrs Negus, noticed the boards in the wash-house about 4ft above the copper, were smouldering. She pulled some of the boards down and found the woodwork behind was on fire. She rushed out for assistance and Mr Burtenshaw, who happened to be passing, with the assistance of Mr J Waldock, attempted to extinguish the flames with pails of water. This had very little effect on the flames, which had by then got a good hold and were through the roof in a very few minutes, and extended to the two cottages on the south occupied by Mrs Negus and Miss Brushett, and this was quickly a mass of flames. The fire then creeping along some old sheds, one of which had been converted into the wash-house where the fire started, caught the other two cottages to the north. The Melbourn fire engine and brigade, in charge of Captain John Newling and Engineer Joseph Stockbridge, was quickly on the spot but, although there was plenty of water close at hand, it was seen at once it was a hopeless task they had in hand, and in less than two hours the cottages were but a heap of smouldering ruins.

Police-Sergt. Salmon was quickly on the spot and Supt. Wilderspin and PC Haylock (from Arrington) arrived soon after.  The smoke and flames were seen from a great distance, and PC Knightly from Great Chishall, PC Housden from Fowlmere, and PC Frost from Bassinbourn, were all in evidence during the conflagration, and kept order amongst the large crowd that gathered.

The circumstances were particularly distressing in the case of Mrs Negus who has been an invalid for some time, but on the afternoon of the fire she was up, and although much distressed she was safely moved to and given shelter at Mrs Felstead’s and later was moved to Mr Joseph Stockbridge’s at Melbourn.

We understand that the buildings were the property of Mrs Egg and were insured with the Alliance Company. The contents of two of the cottages were insured in the Liverpool and Glebe and two others in the Phoenix.

The 1901 census shows that the occupants of the cottages had lived there since at least 31st March 1901.  At that time, their details were recorded as follows: