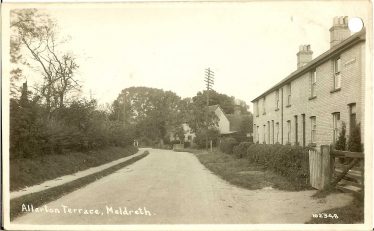 zoom
Gray Family Tree: the Meldreth Connection
Click on the image to view as a PDF 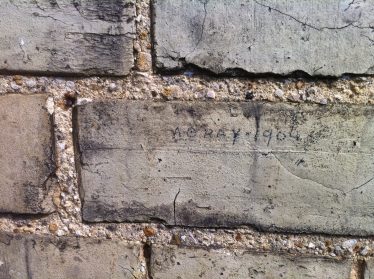 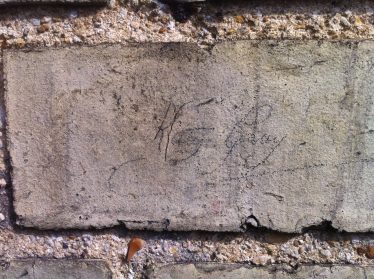 zoom
Signature on the wall of Allerton Terrace
Photograph by Joan Gane, 2014 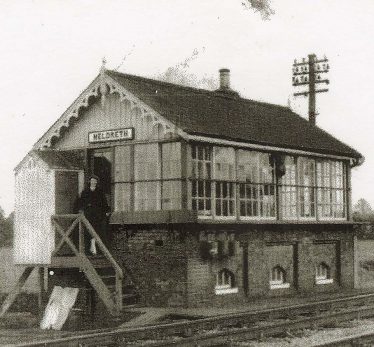 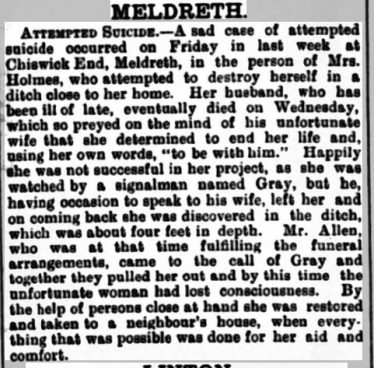 zoom
The report in the Herts & Cambs Reporter
1st July 1898

My family’s connection with Meldreth began between 1875 and 1881 when Alfred Gray and his family moved to Meldreth from Hitchin in Hertfordshire.

In the 1861 census for Hitchin, seventeen-year old Alfred was a bricklayer’s labourer, living with his parents George and Sarah (nee Greer).

In 1866 Alfred married Sarah Anne Worbey, also from Hitchin. Between 1867 and 1875, the couple had four children. By 1871 Alfred had become a railway labourer like his father.

Ten years later, we find Alfred and his family living in Whitecroft Road in Meldreth. Alfred was working as a railway signalman. The first train had come into Meldreth Station from Hitchin thirty years earlier and for Alfred, the move to Meldreth would have meant a better job and perhaps better opportunities for his family. Alfred and Sarah went on to have another five children in Meldreth.

In 1891 and 1901, they were living in Chiswick End in Meldreth, but by 1911 they had moved into one of the Allerton Terrace cottages in the High Street, which were built by the Great Northern Railway for their workers. Their son, Alfred James (who is listed as a “visitor” in the census return) was also working as a signalman and their son Arthur was a railway porter.

An effective signalling system was one of the most important safety measures of the relatively new railway system. Alfred would have worked in the Meldreth signal box, from where he would have controlled the signals and points. He would have been responsible for entering each train into the Train Register Book and would have been able to communicate with workers in other signal boxes along the line via a series of bell codes. One of his other duties would have been to watch the ends of the passing trains in order to see if the last carriage or wagon was displaying a red tail lamp. If it did, the train was complete. If not it could mean that part of the train had detached or that someone had forgotten to place the lamp there: both of which could have serious consequences.

In 1896, an inquest into the suicide of fruit grower, William Casbon in Meldreth, heard that Alfred had been told of the suicide by William’s widow Sarah and had gone with her and found William’s body. Two years later, Alfred saved the life of a neighbour in Chiswick End – a Mrs Holmes who had attempted to commit suicide after the death of her husband. This was reported in the Herts & Cambs Reporter and Royston Crow on 1st July 1898 (see report on the right).

This is probably the incident referred to by Sarah Butler in “Meldreth Village“: There was an accident in the early 1900’s, when a goods engine jumped the rails just before it passed under the bridge, and smashed up the gangers hut which stood in the corner. Unfortunately, the men were having their “beaver” in the hut at the time.  I cannot remember about the casualties, but I do remember the man harnessing up the horse to the station wagon and galloping off to Melbourn to fetch the doctor. Of course, there were no telephones at that time.

The newspaper reports of the accident and the inquest gives more details of the case and of the signalling methods used by the signalmen.

Alfred and his family lived in Meldreth for over thirty years. Alfred died in 1917, aged 73. After his death, his widow returned to Hitchin where she died in 1927 at the age of 80.

An Extract from the Gray Family Tree (14 KB Adobe Acrobat document, opens in a new window)