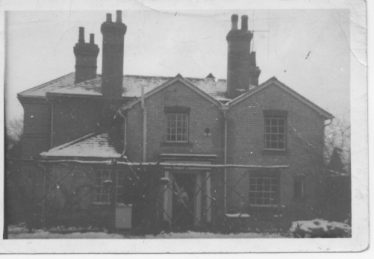 Longmead stands next to the British Queen in the High Street. The house was part of the Manor of Sheene. We know that at one time this house was called The Limes and was later changed to Longmead.

In 1804 Elizabeth Clements became the owner and the 1820 enclosure maps show that the house still belonged to Elizabeth then.

In May 1879 the trustees of William Stockbridge sold the house by auction, which took place at The British Queen. The auction sale notice descibed the house as having two sitting rooms, three bedrooms, a kitchen and the usual offices together with detached chaise-house stables and long range of outbuildings with granary over.

In the 1910 Land Values Duties return, the house is shown as belonging to Mrs Wallis of South Norwood.  In the census return of the following year, Mr & Mrs Hope are shown to be living in the house, which had eight rooms. They had three nurses and two servants living with them. Mrs Hope was known to be an invalid.

The house was rented for many years and several families lived there including a retired vicar and his wife.

Sylvia Gipson recalled the house:
“I remember the house had a small ornamental garden at the back and the rest of the land was orchards right down to the river. Then all the trees were taken out and the gardens were created. Lots of people lived at Longmead, which was owned by someone in Cambridge.

During the war Mrs Bruce lived there. Her husband worked away in London. Mrs Bruce entertained airmen at the house, giving large parties that were very noisy. One night two American airman had a fight and one jumped out of an upstairs window and the police were called.”

In the late 1950’s the house was owned by the Jackson family of Fowlmere and otter hounds were kept in kennels at the bottom of the garden.

Mr and Mrs Barret bought the house in the early 1960’s and there was an incident when the police were called, this time after a family argument when a shotgun was discharged.

Hilary Gipson recalled this incident:
“We were sitting in the car outside our house (63 High Street) when we saw a policeman, Chris Ginn, come out of Longmead with blood all over his shirt. It was very scary but luckily we heard later that no-one had been seriously hurt.”

The Heywood family lived in the house during the early 1970’s and it was sold again to Mr and Mrs Braggins who lived there for over 30 years. During this time the walled vegetable garden was sold and a house built on the site.

The house was sold in 2010, with Mr and Mrs Braggins building a bungalow in the grounds. This bungalow is now called Longmead and in 2015 the larger house was named The Limes once again.