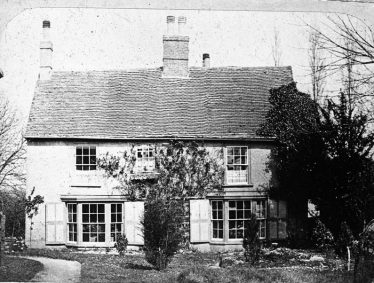 zoom
The southern side of the old Vicarage house, built by Richard Willowes c. 1700 and pulled down in 1877.
Copyright Cambridge Antiquarian Society 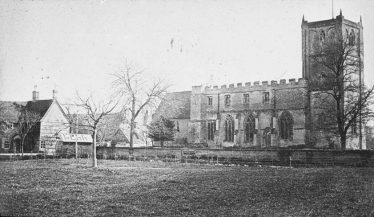 zoom
The western side of the old vicarage house, c.1870. The parsonage tithe barn is also shown, and the stile in the churchyard wall which marked the old course of the footpath to Orwell.
Copyright Cambridge Antiquarian Society 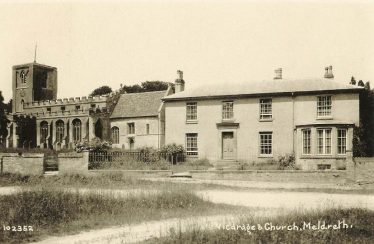 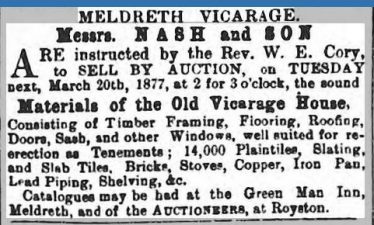 In 1203 Bishop Eustace ordained a vicarage at Meldreth.  In the 1220s bishop John of Fountains confirmed the grant and reserved a payment of £5 for a resident chaplain.

Robert Aleyn was vicar of Meldreth from 1349 until at least 1379.  At this time, the vicarage house was situated to the north east of Holy Trinity Church, possibly on the same site as the vicarage house pictured on the right.  In 1586 the vicarage house had a parlour, hall, chamber, and kitchen. By 1685, however, it was described as poor and pitiful, and repairs were ordered.

On May 2nd 1692, Richard Willowes, B.A., MA., was presented by the Bishop to the Vicarage of Meldreth.  According to W M Palmer, he pulled down “the poor pitiful house of his predecessor” and built the house pictured.  It had 15 windows and so must have been a great contrast to its forerunner.  It is not known how the money for the house was raised but it is thought that Richard Willows had money in addition to his stipend.

In 1783 the house was in good condition, but by 1807 it was in poor repair. It was repaired c. 1830, but in 1836 was described as an old, small, lath and plaster building, only suitable for a small family. It was rebuilt in the 1840s but was demolished in 1877. Prior to demolition, materials from the house were offered for sale.

A map of c. 1800 shows both a rectory and a vicarage house.  The vicarage house is situated to the north of the church and the rectory to the east.

After 1878, the early 19th century house east of the church on the site of the former rectory house[1] was used as the vicarage. In 1886 it was improved by the Ecclesiastical Commissioners.

In 1932 Meldreth was united with the vicarage of Whaddon and the vicarage house was used as a parish room and Sunday school. It was taken into military occupation during the Second World War, and was sold in 1945. According to Reverend Clare’s “Vicar’s Memorandum” book, held at Holy Trinity Church, the vicarage was sold by auction in Royston on 23rd May 1945 “for £1650 to Mrs Emson, widow of F J Emson, farmer of Home Farm, Babraham.”  Rev. Clare states that he “reserved as Glebe, and the site of a Church Hall in the future, a piece of land between the gate and the bridge.”

The parishes of Meldreth and Whaddon were separated in 1952 and Meldreth was linked instead with Melbourn, where vicars now reside.

In 1924 approximately four acres of garden and pasture were attached to the vicarage house, but by 1978 the vicar retained only two acres (the old vicarage meadow).

[1]  According to the Victoria County History (see above) in 1650 the rectory house was a two-storey building with a hall, parlour, kitchen and offices downstairs, and chambers above. It had eight hearths and stood on the same site as the later vicarage house, east of the church.

In 1699, we know from the Window Tax Assessment that there was both a Parsonage House and a Vicarage House.  The former was occupied by George Harrison and had 18 windows, whilst Richard Willows was the occupant of the Vicarage House.