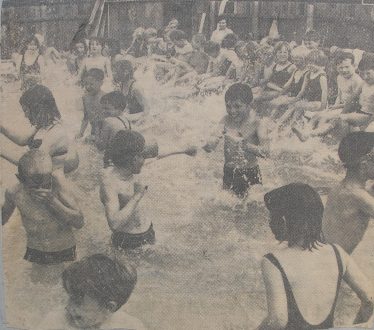 zoom
The opening of the school swimming pool in 1965 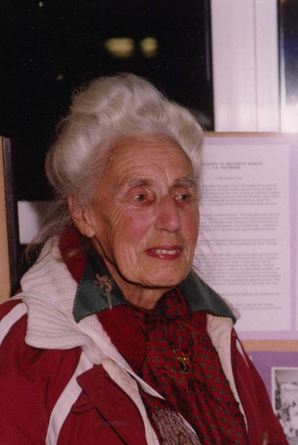 It is quite amazing how much you remember from your school days.

My memories start with Mrs Thompson, the infant teacher. She was really nice, with brown hair and glasses. She lived in a farm bungalow between Shepreth and Barrington. I remember she had a son who came in and played his electric guitar to us. We used to get small bottles of milk every day that we used to leave to warm up on the mantlepiece over the fire. We used to make pictures out of powder paint and also from shapes cut from shiny coloured paper.  You had to lick the glue on the back (yuck).  I also remember playing with wooden building blocks. The books that I remember are “Baba the Elephant” and “Little Black Sambo”. We used to have a half an hour break in the morning and an hour for dinner and I’m sure we had another break in the afternoon.

As I got older I moved into Mrs Rathbone’s  class. She seemed a lot older. She had grey hair which she used to wear in a bun on the back of her head. She also had horse-like front teeth and used to spit when she talked. I remember her reading us stories about a witch called “Ba Ba Yaga” which I have just found out is a Russian folk tale about two children and a witch. We used to make wicker plant pots and raffia lampshades and there was some kind of weaving using cotton reels.

Our next stop was top class with the Headteacher. When I first went to school in 1958, the Headteacher was Mrs Broughton, of whom I have very vague memories. While I was there, I think we had five Headteachers, one of which I cannot remember. The others were Mrs Mansfield who I remember was very strict and I did not like her. Then there was Mrs Sadler: she was really nice and she had a grey Volkswagen beetle. The Head I had for the best two years of my time at school was Mr Harding. He was really good and had three children at the school (Jessica, Lucas and Richard) so I used to spend time at their house playing with them. Apparently he had been a head teacher at Porthleven in Cornwall and also on the volcanic island of  “Tristan da Cunha” in the South Atlantic.

The only other teacher I remember is Mrs Pinney who used to teach French. She also used to be on playground duty and ran the local Cub pack with Mrs Howard.

My memory of assemblies is very vague, but I remember singing the hymns from blue hymn books, including:

I remember playing a triangle, the melodica (a cross between a recorder and a piano) and a mouth organ.

We had desks which we could keep our books and a lot of rubbish in. I remember using pens that were made of bits of wood with metal nibs attached that we would dip into ink pots. We also used pencils that we used to sharpen in a mechanical sharpener that was fixed to the teacher’s desk. I also remember big chunky wax crayons which in later years were superseded by thinner ones with paper around them.  The lessons I remember are Maths and English. Maths I quite liked; we used to recite our times tables every morning. In English, we used to do lots of dictation which I hated because I found it hard to keep up, so it never taught me anything. In fact  it was probably counter-productive, as it totally demoralised me. I was probably slightly dyslexic. We used to do woodwork with balsa wood and I remember making an egg holder. I also remember making felt toys.

I used to have school dinners on Friday as my mother used to go shopping in Cambridge. I remember the pink custard; the only other time I ate at school was the Christmas dinner. I have no memory of dinner ladies, except maybe Mrs Yates.

One of the activities we used to do was country dancing; I remember dancing at the village fetes. We also used to do singing along with the radio and went to some singing competitions. I remember one at Melbourn and one at the Shire Hall in Cambridge. I also remember that we used to go swimming on Fridays at the Green Plunge in Royston. We used to go in an old coach owned by Kenzies Coaches of Shepreth: I see that they still have it and it has been restored. While Mr Harding was at the school he instigated the building of two swimming pools. We also used to go on a nature walks on the other side of the river. I remember putting on shows at Christmas for the parents.

In the playground and field we used to play Cowboys and Indians, British Bulldog and Zulus and Soldiers. We used to play with rocket type things that you put caps in: you would throw them up in the air and they would land with a bang.

The punishment that we used to get in the infant class was to stand at the back of the classroom facing  the wall; this I remember was Derek Knight’s favoured spot.

In Mrs Rathbone’s class you would get a swift smack to the back of the legs or would be given lines – this was writing the same sentence 100 times.

In the top class Mr Harding had a brown plimsoll or a cane that he called Nicholas. These would be applied repeatedly to the back of the legs with force for any misdemeanour in class, an example of which was repeatedly putting an extra “c” in “alike” to make “alicke”.

As for the naughtiest thing I ever did; I think it was carving my name in big letters on the bicycle shed, although other people may have different ideas!

I used to walk to school with Richard Handscombe. There was no school uniform though you were expected to be smart. All the boys wore shorts.

Other things I remember are:

I don’t remember any homework.

I remember that there were some children at the school from other countries: Leon and Beat from Switzerland, Chippy and Bobby Buckingham from South Africa and Kenny Day from the USA.