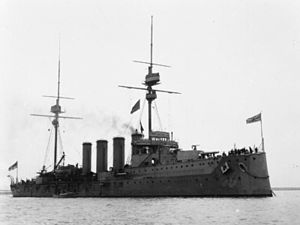 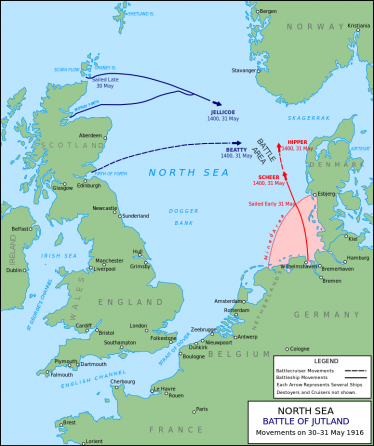 zoom
Map of the Battle of Jutland
Wikipedia

Gunner Herbert Dash, second son of Walter and Elizabeth (nee Bester) Dash of Malton, Meldreth, was one of those lost when HMS Black Prince was sunk in the naval battle off Jutland. News of his death on 31st May 1916 was carried in an article in the Royston Crow of the same date.

Herbert Dash (service number: J/6403) was just 24 years of age when he died and had been in the Royal Navy since he was 15. After his death his commanding officer wrote that he was devoted to his work as a gunner and showed great promise in this important branch of the service. He had been serving on HMS Hampshire, the ship which went down with Lord Kitchener, before being transferred to the Black Prince.

HMS Black Prince was a Duke of Edinburgh class armoured cruiser built for the Royal Navy. Launched on 8th November 1904, she was stationed in the Mediterranean when the First World War began and participated in the pursuit of the German battle cruiser SMS Goeben and light cruiser SMS Breslau. After the German ships reached Ottoman waters, the ship was sent to the Red Sea to protect troop convoys arriving from India and to search for German merchant ships. After capturing two vessels, Black Prince was transferred to the Grand Fleet in December 1914 and sunk during the Battle of Jutland, with all hands killed. The ship’s complement was 789 men.

In a report in the Daily Mirror, the Secretary of the Admiralty made the following announcement: “On the afternoon of Wednesday, May 31, a naval engagement took place off the coast of Jutland. The British ships on which the brunt of the fighting fell were the battlecruiser fleet and some cruisers and light cruisers, supported by four fast battleships. Among these the losses were heavy. The German battle fleet, aided by a low visibility, avoided prolonged action with our main forces, and soon after these appeared on the scene the enemy returned to port, though not before receiving severe damage from our battleships. The battlecruisers Queen Mary, Indefatigable, Invincible and the cruisers Defence and Black Prince were sunk.”

Although Jutland was the only major naval battle of World War I, in terms of the numbers of battleships and battlecruisers engaged, it became the largest sea battle in the history of naval warfare bringing together the two most powerful naval forces in existence at that time. Altogether it involved 250 ships and around 100,000 men. Though the British suffered more casualties than the Germans, they claimed the battle as a victory because the German fleet stayed at home for the remainder of the War and relied increasingly on U-boats.

Seaman Flack, from Haslingfield, who had been a friend of Herbert Dash from boyhood, also lost his life in the Black Prince. Mr and Mrs Dash had one other son in the Navy and three in the Army.

An ‘In Memoriam’ notice which appeared in the local paper on 16th June 1916 read as follows:

Dash – On 31st May in the naval battle off Jutland, Herbert, the dearly loved son of Mr and Mrs Dash, Malton, Meldreth. To his memory “Glory, honour and love”.

A tribute from one of his brothers followed:

In that beautiful ship called “Rest”
And his brave head is pillowed
Safe on his Saviour’s breast.

Herbert Dash is commemorated on the Portsmouth Naval Memorial, one of 9,666 members of the Royal Navy who died in the First World War and have no known grave but the sea.