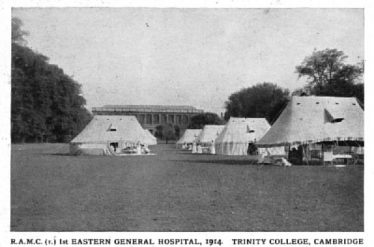 zoom
Hospital Tents on the Backs, Cambridge, The Wren Library, Trinity College in the background
www.roll-of-honour.com/CambridgeEasternNo1Hospital.html 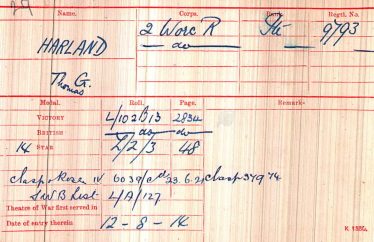 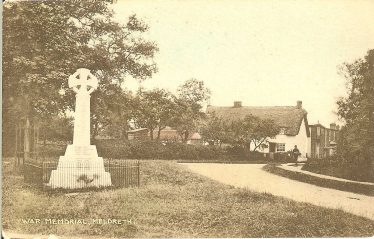 Thomas Harland came from London where he was born in 1887 in Kentish Town. He had a younger sister, Ethel and brother, Alfred. His mother, Mary, was widowed whilst still young and by the time of the 1901 census she had re-married and was living in Chiswick End, Meldreth. Her second husband, John Wing, a widower, worked as a ‘straw tyer’ and had three sons, Bert, William (Bill Wing senior) and Stanley. They were then aged 12, 8 and 1 respectively; a daughter, Gladys, was aged 3. Mary’s children from her first marriage are also shown as living with the family: Thomas, 14, Ethel, 13, and Alfred, 12.

In 1901 Thomas was working as a bicycle apprentice. Subsequently, he enlisted in the Army and was serving as a Reservist with the Worcester Regiment when he was badly injured at the Battle of Mons in October 1914. A report in the Herts and Cambs Reporter of 9th October told how he had been brought to England and was at present under treatment at Trinity College Temporary Hospital, Cambridge.

“Upon enquiry we learn that he has been shot in both legs, the wound in the left leg being of a very serious nature. The last news to be heard of his condition was favourable, which we hope will continue.” Private Harland had given what was described as a thrilling account “of how, after being wounded, he was literally stripped of all his clothing by the enemy, who afterwards threw back his tunic and watch. With these he managed to crawl about seven yards under great difficulty out of the firing range”.

The 1st Eastern General Hospital, to which Private Harland was taken, had its headquarters in Trinity College, with beds in the Leys School and in the grounds of Trinity College, and later in temporary buildings on the cricket grounds of Clare College and King’s College to the south of Burrell’s Walk. By the end of 1915, there were more than 1,500 beds in use, rising finally to 1,700, with several operating theatres. Doctors and nurses from Addenbrooke’s treated the patients, and auxiliary hospitals were built elsewhere in the city and in surrounding villages (as at Shepreth). Soldiers were usually brought to Cambridge by train, and then transferred by ambulance – there was a steady stream ferrying patients along the Backs.

After his short period of Army service and recovery from his injuries, Thomas Harland returned to Meldreth and worked as a coalman, later marrying his wife, Minnie. They lived in part of Hope Folly on Whitecroft Road.

He died, aged 69 as a patient in the Villa, Fulbourn Hospital, in May 1955. Minnie moved to live in the Addleston charity cottages in Chiswick End and, when they were demolished, she was re-housed in a new bungalow at 3 Bell Close, Meldreth. She died, aged 98 years, in 1983.

With thanks to Ann Handscombe and Kathryn Betts for the research upon which this is based.