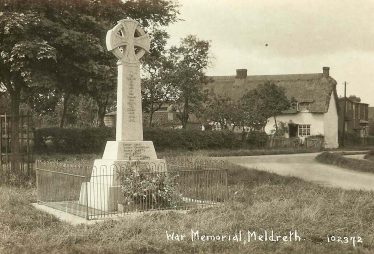 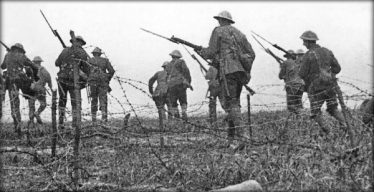 zoom
The Battle of the Somme, July - November, 1916
en.wikipedia.org 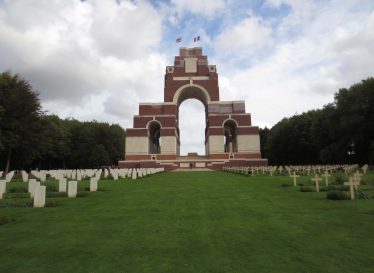 zoom
Thiepval Memorial to the Missing of the Somme
Photograph by Kathryn Betts, October 2014

Private John Fuller’s name is recorded on Meldreth’s War Memorial which commemorates those who gave their lives in the service of their country in the Great War.

News that a Meldreth man was among the casualties in the Battle of the Somme was carried in the Cambridge Independent Press of Friday 6th October 1916:

“Another Meldreth man has fallen in action. Mrs Fuller of Allerton Terrace, Meldreth received official intimation on Saturday last that her husband, Private John Fuller of the Grenadier Guards, had been killed in action on 14th September. Prior to the war he was employed by Mr Elbourn of Meldreth, for whom he worked only a short time; having been in the Army before the war and as soon as war was declared he was called to his regiment and sent to the front. Much sympathy will be felt for his widow and two children in their sad loss.”

So John Fuller became one of the estimated 485,000 British and French troops to die in one of the Great War’s most prolonged and deadliest battles fought on the banks of the Somme river in France which, in total, claimed the lives of approximately 1 million men.

John did not originate from Meldreth but from Burwell in Cambridgeshire: his father was Robert and his mother Ann. At the time of the 1901 census, the family – a large one – lived in Burwell: John had three brothers, Arthur, Charles and ‘Birty’ and three sisters, Nellie, Annie and Alice. Subsequently, the family moved to Reed, a village south of Royston and at the war’s outbreak John had already joined the Army and married his wife, Agnes.

As the newspaper report records, he was  called up to join his regiment in France as Guardsman Fuller 11012 of the Grenadier Guards. He arrived in France on the 22nd August 1914 and served in the 4th (Guards) Brigade of the 2nd Division. He went on to see action in many of the Great War’s best known battles, including Marne, Aisne, Ypres and Loos. The Battle of the Somme, in which he was to lose his life, began on 1st July 1916 and was to continue until 18th November 1916 when heavy rains and the onset of winter brought hostilities to an end. It was the first battle of the Great War in which tanks were used in addition to the more familiar armoury of mines, artillery, poisonous gas and machine guns.

Steven Fuller(1), who has compiled a detailed account of the battle, records that “John and the Guards Division moved towards the front in readiness for their assault and bivouacked in Carnoy overnight on the 13th September. The next night was clear, fine and moonlit as they made their final move to the front. The battalion set off at 9pm, headed for the front lines and their jumping off positions, marching through the devastated Trones Wood and what remained of the villages of Guillemont and Ginchy.” His 2nd Brigade joined the Coldstream Guards on the left of the British line. Fighting began in earnest at 6am on the morning of 15th September and the British forces advanced following a heavy artillery barrage. They were met with fierce German shelling and a line of German machine guns. The supporting tanks, which could only move at a few miles per hour, failed to materialise and the British advance was impeded with many units being left exposed in ‘No Man’s Land’ and suffering devastatingly high casualties. Though Private Fuller is recorded as having died on 14th September, this was the day before the battle major and it is likely that he fell during the assault on the next day when many of the losses were sustained. He was 32 years old.

Along with many of those who died during this notorious battle, John Fuller’s body was not recovered but he is remembered on the Thiepval Memorial to the Missing on the Somme. “This Memorial bears the names of more than 72,000 officers and men of the United Kingdom and South African forces who died in the Somme sector before 20 March 1918 and have no known grave. Over 90% of those commemorated died between July and November 1916. The memorial also serves as an Anglo-French Battle Memorial in recognition of the joint nature of the 1916 offensive and a small cemetery containing equal numbers of Commonwealth and French graves lies at the foot of the memorial.” (Commonwealth War Graves Commission)

Acknowledgement: With thanks to Bruce Huett and Steven Fuller.