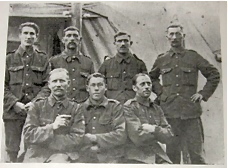 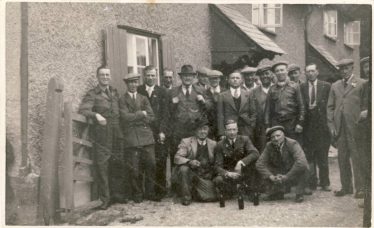 zoom
Eustace Waldock, second from right, middle row, with other 'regulars' outside the British Queen in the 1940s
Photograph supplied by Sylvia Gipson

Eustace Waldock, a soldier who was taken prisoner during the First World War, was born in Meldreth. His parents were George Waldock, a farm labourer, who came from the village and Elizabeth, from Barrington. In 1891 the Waldock family was living in a cottage in Chiswick End, Meldreth. Eustace, aged 9 at the time, had two older  brothers, George, aged 17 and Ernest, 15; a younger brother, Aquila, was aged 1. He had two sisters, Elizabeth, aged 12 in 1891 and Frances, 11.

By 1901 the family had moved to another cottage in what was then High Street, Meldreth and is now Station Road, opposite Sheene Manor. Eustace was working as an agricultural horse carter, as was his father. Another sister had arrived: Mary who was by then six years old.

Eustace Waldock was already a serving soldier at the outbreak of the First World War. Just short of his twentieth birthday, aged 19 years and 11 months, he had enlisted in the East Lancashire Regiment on 1st April 1902. Attending at Ely for medical examination, he was described as having a fresh complexion, blue eyes and light brown hair. He enlisted for a period of twelve years, the first three in Army Service and the remaining nine in the First Class of the Army Reserve. In 1911 Eustace was serving in Egypt as a Private in the First Battalion of the Suffolk Regiment (Infantry).

He married Beatrice Alice Brown in 1912. A son, Basil Eustace George Waldock, who suffered from blindness, was born in 1913.

Eustace Waldock’s three brothers also saw military service – Richard, who served in the 1st East Lancashires and subsequently in the Bedfords; Ernest, in the 1st Suffolk Regiment and Aquila, a Sergeant in the 1st Hertfordshire Regiment.

Eustace was taken prisoner during the conflict and sent to Doeberitz, a huge Prisoner of War camp housing 10,000 men about 15 miles from Berlin. An Associated Press correspondent, who visited the camp as part of a group of journalists from neutral countries, wrote that “how to control the throng of prisoners so that discipline may be tempered with justice is a problem which the Germans have been studying with thoroughness.” He described the camp as “well organised, active and intensely interesting, and its inhabitants as contented as could be expected in the circumstances.” Doeberitz consisted of a collection of long wooden shacks, built by the prisoners. It was enclosed by a barbed wire wire fence “ten or a dozen feet high”. At meal times “French, Belgians, English and Russians gather together and pass through the cook houses. Each house is equipped with huge boilers containing hundreds of quarts of stew, soup or goulash that forms the chief item on the bill of fare.” The food was said to be nourishing but monotonous. “The means of relieving this monotony lies in the canteen and that is available only for the men who receive money from home.” The camp had a Post Office handling between 50,000 and 60,000 letters per month, with prisoners permitted to write two letters per week.

After the war, Eustace Waldock returned to Meldreth and lived with his wife in a house called Roselea in the High Street (now North End). He died on 29th January 1950, aged 68, after a short illness. His obituary notice records that he was “an old soldier” and had been a prisoner of war for four years during the First World War. When he died his widow was left with responsibility for looking after their disabled son who was 37 years old and to whom it is said she had given “a lifetime of love and devotion.” Representatives of the British Legion were among the mourners, one bearing its Standard. Floral tributes came from members of his family and also Meldreth Football Club and “pals at the (British) Queen”.