You are here: HomenextPeoplenextGroupsnextMeldreth BrowniesnextMy Memories of Being a Brownie

My Memories of Being a Brownie 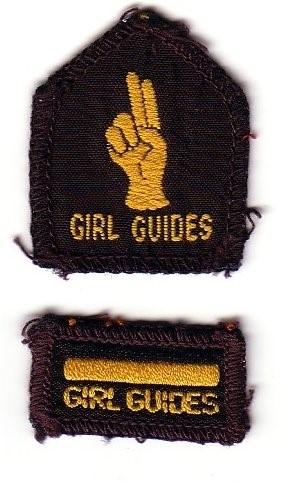 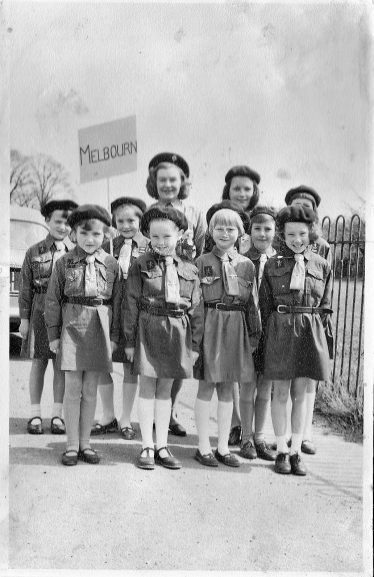 I joined 1st Meldreth (Holy Trinity) Brownies in 1964. We met in Meldreth School. I remember we used the two classrooms in the old school building and then later we moved into the new extension. The hall there seemed vast.

I was very proud of my Brownie uniform. We wore a brown beret, brown cotton dress with pockets and a brown leather belt. We also wore a tie which was a large square of yellow material which, when folded in a special way, formed the tie. This could also be used as a triangular bandage! On my Brownie tie I wore my Promise Badge, which was polished each week. I was lucky to have a new Brownie dress as most girls had a second-hand dress where the hem had been turned up and then let down as they grew. Some dresses had a washed out look as they had been laundered many times over several years.

We were expected to always look smart with long white socks and shiny shoes. In my pockets, I carried a notebook and pencil, a safety pin, a piece of string, change for the telephone and a clean handkerchief.

Our Brown Owl was Ann Handscombe and our Tawny Owl was Kathleen Barlow.

Brownies were named after magical little creatures, “Brownies”, in a story written by Juliana Horatio Ewing about two children, Tommy and Betty, who met a Wise Owl. Originally the girls were called “Rosebuds” but were renamed in 1915 after girls complained they didn’t like their name. Thank goodness; I don’t think I was very rosebud like!

The Brownie Pack was divided into groups of six girls called Sixes, with a Sixer in charge and a deputy called a Seconder. I was in the Elves and our motto was “This is what we do as elves, think of others not ourselves”.

Later, I became a Gnome and our motto was “Here you see the laughing gnome, helping mother in our homes”. The pinnacle of my Brownie career was to become a sixer for the Gnomes.

At the beginning of each meeting a toadstool and Owl were placed in the centre of the room and our subs were collected and put into the owl. I think we must have danced in a circle and sang a song. This was called a Brownie Ring.

During the meeting we played games. One I remember was Kim’s game where a tray of small items had to be committed to memory. Then we closed our eyes and one item was taken away and we had to guess which one.

The Brownie Promise I remember:

I promise to do my best to do my duty to God, to serve the Queen, to help other people and keep the Brownie law.

A Brownie thinks of others before herself and does a good turn every day.

During the meetings we worked towards a Golden Bar and then a Golden Hand.

I remember learning how to tie a parcel, tie my shoe laces securely, make a plait, lay a table, lay a tea tray, clean shoes, pack a suitcase, strike a match correctly and light a candle, learn the first verse of the National Anthem, know the composition of the Union Flag and the most useful of all, how to wash up correctly: glasses then cutlery, teacup and saucers, bowls, plates then pans and lastly greasy frying pans and dirty baking trays.

One of my most vivid memories was going to Mrs Marr’s house, The Limes in the High Street to earn my Homemaker badge. I had to lay and light a fire, something most children could do in those days as we nearly all had open fires. No firelighters were allowed, just newspaper and kindling and coals.

In 1965 some of the Brownie pack (pictured) were chosen to go to Cambridge High School for Girls on Long Road to welcome Lady Baden Powell, the Chief Guide. She came to Cambridge to open a Guide HQ in Perne Road.

Moving up to Guides

When you gained your golden hand you could fly up to Guides. You could wear your Brownie wing on the sleeve of your Guide uniform. I don’t remember my flying up ceremony in 1968, but I do have my Brownie wings to this day.

There were no Guides in Meldreth at this time so I went to join a Guide Company in Royston. I really enjoyed being a Brownie and a Guide as subsequently I became a Guide Leader in Yorkshire. Happy memories.