You are here: HomenextNew contributionsnextThe Twenty Year Search for a Burial Ground

The Twenty Year Search for a Burial Ground 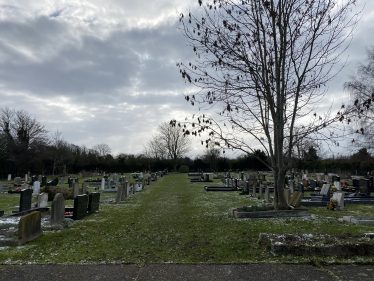 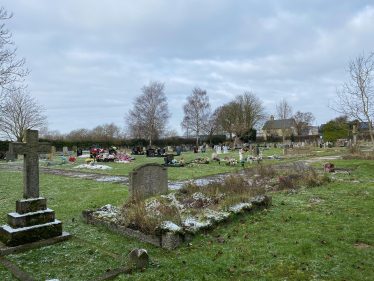 We know from the Bishops Transcripts (contemporary copies of the parish registers) that burials have taken place in Holy Trinity churchyard since at least 1599.

It was just over three hundred years later, in 1907, that the churchyard was officially closed.

The information below relates to the search for a new burial ground, which began at least as early as 1902 and was to last for twenty years.

For more information on the churchyard and the burials that have taken place there, please see our pages on Holy Trinity Churchyard.

At a Meldreth Parish Council meeting on 26th April 1902, a letter from the vicar was read with reference to the churchyard being full. It was resolved to call a meeting of parishioners to discuss the matter and so began the search for a new burial ground.

The task proved to be a difficult one for several reasons. Over the next decade, a number of different plots in the village were looked at but were all rejected due to objections and/or unsuitability.

At all of the above sites, test holes were dug and water was found at between 6 and 7 feet below the surface.

The location that seemed to attract most controversy, was the Vicarage field. In 1907, Reverend Harvey let it be known that, providing his income was not reduced, he would be quite willing for a piece of glebe land adjoining the churchyard to be used and the Ecclesiastical Commissioners agreed to consider this proposition. However, in March 1910 the Reverend Harvey told a Parish Meeting  that,

I should oppose with all the resources at my command, and place every obstacle in the way of Church Land being taken for the purposes of a General Cemetery.

He gave an explanation for this in a letter published in the Royston Crow on 18th March 1910:
I think it is a very great hardship that the only grass field attached to the Vicarage, and that I possess at all, consisting of barely two acres, should be broken up for a General Cemetery, over which Cemetery I should have no control whatever; and such act would be a gross injustice, for it would mean the taking away of Church Land given to the Vicar of Meldreth and his successors for all time …

On 16th May 1907, the Parish Council passed the following resolution:

After repeated attempts for over four years to obtain a suitable piece of ground for burial purposes in the parish, the Parish Council have no other alternative but to apply to the Local Government Board to send down an Inspector to view the village to see if they can select a suitable spot, as the Council feel they are now at a dead-lock in the matter.

The Closure of the Churchyard

In 1907 Holy Trinity churchyard was officially closed.  For the next fifteen years, villagers had to be buried in Whaddon, Shepreth, Melbourn and other nearby villages.

Having failed, by other means, to acquire a suitable plot of land, an Inquiry was held in the Parish Room on 29th March 1910.  Approximately 30-40 residents were present in addition to the officials.

The Inquiry heard that in the ten years to 1907, an average of 8.2 burials per year had taken place in the churchyard.  It was felt that a one acre site would last the village for approximately 80 years.

At the Inquiry it emerged that tests had been done on the Vicarage Field but the water table was less than five feet below the surface and the land would therefore need to be drained into the river. Rev. Harvey claimed that he had consented to a piece of his garden being used but had failed to obtain the necessary consent, but see his comments in a letter to the Royston Crow (above).

There was laughter when Percy Elbourn referred to Rev. Harvey’s “pig-headedness”: a statement he withdrew when the inspector said,

In May 1910, the application for compulsory powers to purchase the vicarage field was abandoned due to the necessity of draining the field before it was fit for use as a burial ground.

Meldreth Parish Council was again asked to take steps to procure a suitable site. Over the next few years, the following locations were considered:

Finally, on 11th December 1918 at a meeting of parishioners, it was agreed to buy a plot of land of three roods and 30 poles in Fenny Lane from the late G Palmer at a cost of £100 per acre for use as a burial ground.

In 1920, this site was given formal approval by the Ministry of Health.

On 30th March 1921 the Fenny Lane proposal was carried unanimously. The Parish Council took out a loan of £400 to cover the costs associated with the new cemetery.

A few weeks later, on 20th April 1921 another meeting of parishioners had to be held because notice had not been properly given for the previous one. The proposal was approved unanimously.

Over the next year, the Parish Council prepared the land; erecting fencing, ordering the construction of a funeral bier and tool house from Herbert Gipson and agreeing on a list of charges for burials (see the downloadable pdf file below for full details).

On 27th May 1922, twenty years after the search first began, the first recorded burial took place in the new cemetery.

The following articles and letters were used in the preparation of this page. Newspaper articles were taken from the Royston Crow unless otherwise stated.