The Casbon Family of Meldreth 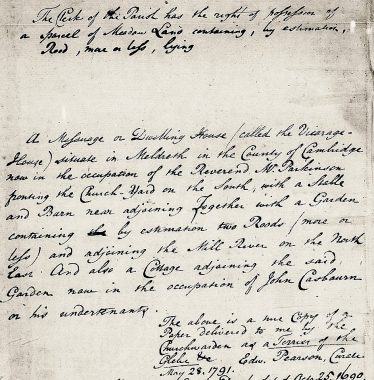 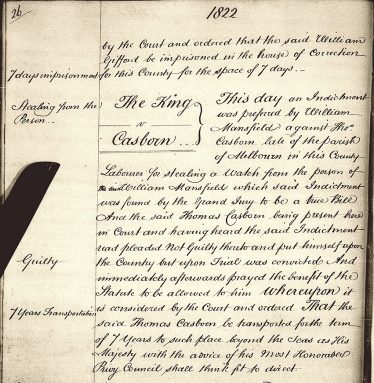 zoom
Conviction of Thomas Casbon in 1822 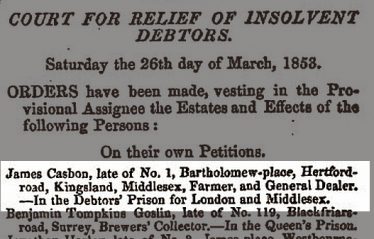 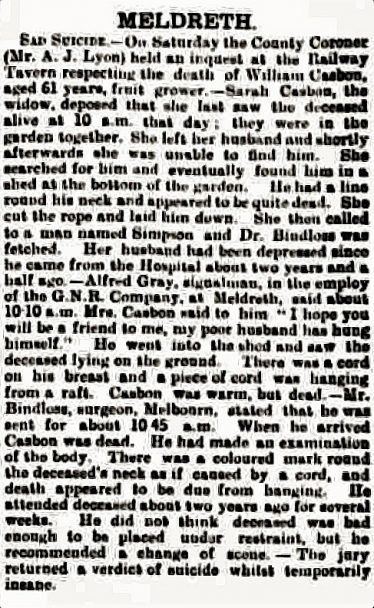 The earliest records of this family in Meldreth date back to the early 1700s, although the name and its many variants can be found in parish records throughout southern Cambridgeshire as early as 1560, when Katherine Casbolde was married to John Smithe in Melbourn. The family was situated in Melbourn and other neighbouring parishes throughout much of the 17th century.

The first records of the family in Meldreth are the births of John (in 1701) and William (in 1703) to William and Ann Casbel. These records are unusual in that they appear in the parish register (or perhaps a later copy) under the years of their births, but with a separate entry for their baptisms in 1707 (after the death of their father). (see the excerpt from Meldreth Parish Register (Baptism) 1707, above right).

We also have baptismal records of several children to John and Anne Casbell, beginning in 1712. John appears to have been a cordwainer (shoemaker), as there is a record of apprentice duties paid by “John Casball of Meldreth” for his apprentice James Sharbolt in December 1718. John—“a poor shoemaker” was buried in March 1727. Anne was buried in March 1732.

Likely candidates for the fathers of the two families described above are the brothers William and John Catsbold, who were baptised at Melbourn in 1669/70 and 1672, respectively. (see Casbon Timeline.pdf)

Shoemaking must have been a family tradition, for in July 1735 we find that “Will Casbill of Mildred in Cambridge Cordw[ain]er” paid the apprenticeship duties for “John Casbill of Orwell.” (see Record of Apprenticeship Duties 1736, above right). Will might have been the one born in Meldreth in 1703 and baptised in 1707. Or, he might also have been William Casbolt, who was baptised in Orwell in 1695. He was probably the man who married “Elizabeth Titmarsh widow” in Meldreth in 1735.

The apprentice, John, was baptised in Orwell on 26th November 1721, the son of Thomas and Mary (Jeap) Casborn. John married Ann Chamberlain in Wimpole in January 1742/43. The Meldreth parish registers record the baptisms of five children to John and Ann—three boys, one of whom died in infancy, and two girls. One son, James, likely became a cordwainer himself and settled in Therfield. The remaining son, Thomas, is discussed below.

John seems to have achieved some success and social standing in Meldreth. Another record shows that he paid the duties for an apprentice in 1773. At some point, (probably 1782, when the incumbent was buried) he was appointed as parish clerk. We know this from the burial record of “John Casborn, Parish Clerk, aged 75” on 4 January 1796.

As parish clerk, John was apparently entitled to certain land rights. A notation written on the inside cover of the 1783–1812 parish register and dated 28 May 1791 says that “the Clerk of the Parish has the right of possession of a parcel of Meadow Land containing, by estimation , [blank] Rood, more or less, lying [the rest of the description is missing].” Further on, the same notation refers to “… a Cottage adjoining the said Garden [of the Vicarage] now in the occupation of John Casbourn or his undertenants.” (see 1791 Memo re parish clerk land, above right).

John’s eldest son, Thomas (baptised December 1743), remained in Meldreth and married Jane Wilson (1741–1831) there on 25th October 1769. The parish records tell us nothing about Thomas’s occupation. Notably, Thomas and Jane produced four sons who lived to adulthood. One of them, Thomas (baptised 1775), appears to have settled in Shepreth after his marriage in 1806. The other three: James, Isaac, and John remained in or around Meldreth for the rest of their lives. Thomas was buried in 1799 and his widow, Jane, in 1831.

Three Families: the Sons of Thomas and Jane

The eldest son of Thomas and Jane, baptised as James Casbull in July 1772, married Ann Ward in 1793 and had one daughter before Ann’s death in 1795. He then married Mary Howse in 1796 and had two daughters and a son, James (baptised 1706). Little is known of James, the father, except for one important fact: he had copyhold rights to a small parcel of land along Whitecroft Road in Meldreth. He is mentioned in the 1820 Inclosure Award Book. (see Transcription of the 1820 Meldreth Award Book.pdf). How and when he came to be a landowner is unknown. Could this be the parcel of land mentioned in the notation for his grandfather John, above? His property rights were apparently passed on to his son, James after his death in 1833. His widow, Mary, was buried in 1837.

Their son Thomas (my third great-grandfather) was sentenced in 1822 to seven years’ transportation after stealing a watch from a fellow labourer. (see Conviction of Thomas Casbon in 1822, above right) However, his sentence was commuted; instead of transportation, he served all seven years as a prisoner on the hulk Leviathan, anchored at Portsmouth.

John, the youngest son of Thomas and Jane, was baptised in Meldreth in 1779. He married Martha “Patty” Wagstaff in Meldreth in 1802. Their first two children, Jane and William, where baptised in Royston in 1803 and 1805, respectively. A third daughter, Edith, was baptised in Whaddon in 1808. John later moved his family to Meldreth, where he was  buried in December 1813. Martha subsequently married a widower named Samuel Barn(e)s.

By 1841, the great-grandchildren of John (1721–1796) were having families of their own. Seventeen baptisms were recorded between 1832 and 1849 (compared to eight burials). The number of households and family members peaked with the 1841 census, when seven households comprising 30 family members were counted (see 1841-census-summary.pdf).

With one exception, the male heads of household were agricultural labourers. The one exception is James Casbon (baptised 1806), son of the landowner James (1772–1833). James’s occupation was listed as “Farmer.” His household also included a servant, an indication of his relative wealth compared to his cousins.

It was a difficult time for agricultural labourers. Enclosure had taken away the common land rights and raised rents. Wages were depressed because of population growth. The Industrial Revolution was driving people into the cities in search of new jobs and opportunities. These forces began to act on the Casbon families of Meldreth during this time and accelerated in the coming decades.

The first to leave was Thomas and his family, who departed for the United States in 1846. (See “Thomas Casbon, James Scruby, and the Meldreth-Wayne County, Ohio Connection”.)

Death destroyed two families. Lydia, the widow of Joseph, died of consumption in 1851, followed by her daughter Emma one year later. (The only surviving child, Mary, eventually joined her uncle Thomas in America.) Elizabeth, the wife of James (born about 1813) also died of consumption in 1852. Her death tore the family apart. Their youngest daughter, Emma, died in the Royston Union workhouse in 1853. The other young children in the family were probably also sent to the workhouse. James and his family cannot be found in the 1861 census (although James does appear later in Cottenham, before leaving for the United States in 1870).

A different kind of trouble faced James (baptised 1806), the “farmer and carrier”. In 1853, we find James in a London debtors’ prison, facing the Insolvent Debtors Court. (See James Casbon in Debtors’ Prison, above right.) It appears that he had to sell the copyhold allotment named in the 1820 Inclosure award to settle his debts. By 1854 he was living in Barley, Hertfordshire with the rest of his family, never to return to Meldreth.

Meanwhile, in 1852, 10-year-old John Casbon, son of William (baptised 1805), was sentenced to seven years’ transportation for setting fire to a stack of haulm (dried stems and stalks from the harvest). (see “The Old Cow Got Round It”.) He ended up serving his sentence at a reform school for boys.

1861 and Beyond: Decline and Extinction

By the 1861 census, there were only 4 Casbon households in Meldreth with 14 family members (see 1861 census summary) As children reached adulthood, the young women were either married or hired elsewhere as servants. The young men moved south to seek railway jobs. William Casbon (baptised 1836, son of William & Mary) was the only child of the previous generation who remained in Meldreth.

The last Casbon marriage in Meldreth took place in 1863 and the last baptism in 1864.

In the 1871 census, there were 3 households with 10 family members (see 1871-census-summary.pdf). The elder Jane had moved to Melbourn. Her entry in the 1871 census has the interesting notation, “cripple from birth”.

William died by suicide in 1896. (see William Casbon Inquest, Herts and Cambs Reporter and Royston Crow, 13th Mar 1896, above right) Sarah later moved to Hitchin to live with her son Walter. She died in Hitchin on 27th Dec 1905 and was buried in Meldreth alongside her husband. Hers was the last Casbon burial to take place in Meldreth; their headstone is the only one with the family name that remains in Holy Trinity churchyard. With her death, two centuries of Casbons in Meldreth came to an end.

* The one exception is that Martha Casbon (baptised 1855), was living in Meldreth at the time of the 1939 Register, probably in retirement, after spending most of her adult life as a domestic servant and cook in the London area. At the time of her death in 1947, she was living at Melbourn.