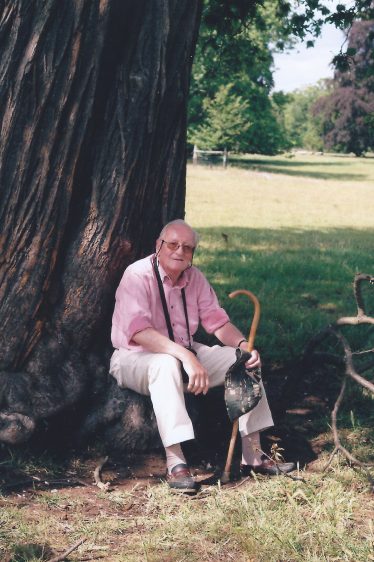 I first knew Keith as a work colleague and later as a friend and close neighbour. Keith had already joined Aero Research and was working in the labs when I joined the Bonded Structures Division in Duxford. His career was meteoric, having started from humble beginnings in a small terraced house in Heaton, Mersey, living with his parents and maternal grandparents. His father suffered from poor health but gave him great encouragement as did the rest of the family. Eventually, Keith won a full scholarship to Manchester Grammar School, from his primary school.

Academically, he achieved the highest Chemistry A Level result in the country and consequently won a state scholarship to University, which took him to Trinity Hall, Cambridge to read Natural Sciences. He relished his time there and joined many of the societies. With a PhD under his belt he arrived in Duxford and met Tessa in 1963. He progressed up the ladder at Aero Research where he ultimately became Managing Director of the newly named Ciba Geigy.

I knew Keith and Tessa from when they started their married life in Saffron Walden. When Tessa was expecting Alison, their first born, he had an incredible close call when on the 27th October 1965 his BEA Vanguard flight from Edinburgh was delayed. He made alternative arrangements and caught a train to London instead of flying into Heathrow, where tragically that aircraft crashed with the loss of all on board.

Keith’s great passions were cricket and football: he was a great supporter of Manchester City. He then took to skiing and tennis which he pursued strongly until diagnosed with his illness.

Away from the office, he enjoyed a number of pastimes, including bridge, theatre, opera and music and joined us frequently to play tennis. He also Chaired the Governors of the Meldreth Primary School and was Chairman of Meldreth Parish Council. With his great number of friends and church activities, he also started a dining club. He, Tessa and the family travelled extensively, walking many of the trails in the UK, Alps, the Himalayas and Africa.

We all have very many memories of his great achievements, which culminated in the Chairmanship of May and Baker, part of the Rhone Poulenc Group and finally Amec.

Keith never really retired, pursuing so many of his loved pastimes and enjoying the pleasures of his extensive family and friends.

It was only with the help of the eulogy given at the memorial service at Holy Trinity Church, Meldreth and the reception on Friday 30th September 2016 that I was able to prepare this tribute, which barely does justice to his amazing life.

He is sadly missed by us all and his loving Tessa, daughters, Alison, Ruth, Bridget, sons-in-law Rob, Trevor, Richard and his grandchildren.

May he rest in peace.