You are here: HomenextPeoplenextObituariesnextGilly Gilham 1922 - 2010 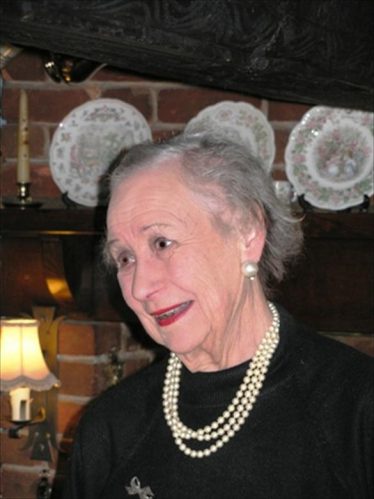 The following obituary appeared in the June 2010 issue of Meldreth Matters.

Below is a tribute to Gilly, written  by June Comben following Gilly’s death on Saturday 17 April 2010.  Following June’s article is an extract of a piece written by Gilly herself about her life when she moved to Meldreth.

On meeting Gilly, the first thing anyone noticed was that she was a Lady.  The next was her sense of humour; she saw the funny side of most things.

Her name was Doris, but she soon made it plain she didn’t like to be called by that name. We, in the village knew her as “Gilly” and it’s no secret her family called her “Pog”. Don’t ask me why, they always had since she was a child.  She had three sisters and only one brother, who was killed in the last war. Gilly herself only had the one daughter: her lovely Liz. She regretted not being able to have more children, and in these modern times she thought she would have been able to. Her blood group was the type that produced “blue babies” and in those early days this wasn’t good. What a pity, for she really loved children and had a wonderful way with them. Just ask anyone who worked with her at Wimpole in The Living History group. When she was younger she was a primary school teacher and kept her classes amused with her artistic talents. In the Meldreth Art Group she was famous for her children’s pictures and in their exhibitions had her own little corner for her pictures which always sold well.

She was a long term member of the WI, always willing to help in any way that she could. We were especially delighted if she was asked to give a vote of thanks, because we knew we were all in for a treat with one of her poems, something else she was famous for. Give her a present, a meal, do a small favour and sure enough a thank you was in the post in the form of a super poem. I have a lovely collection which I will treasure.

During the past two years her close friends noticed with some alarm that she was losing weight, but, she seemed alright for a time. Then other problems reared their ugly head, and we began to worry more. At the end of last year she was taken into hospital a couple of times and appeared to recover, but the weight was coming off at a more alarming rate. By the beginning of December it was very apparent all was not well. She was taken into hospital again and this time was there until after the New Year. When she was told by the doctor that she would not see another Christmas, she cheerfully said, “I hope I see the Spring”. And she did.

Extract from ‘My Life’ by Gilly Gilham

We found this adorable thatched cottage in the little village of Meldreth.

“Have you thought this through?” said all our friends. “They don’t like Townies in the country – you won’t be welcome”. HOW WRONG THEY WERE!! From day one we were made so welcome. We just could not believe how friendly and caring everybody was. After London this came as a big shock!! Soon I found myself on the Village Hall Committee, President of the WI, Chairman of the Gardening Club, a member of Terry Symond’s Art Class, a member of Wendy Braid’s Super Troupers. (What a star that girl is) and lastly on the village Warden Scheme. Yet another committee, all great fun.

I lost my darling Robert in December of 1988, but carried on caring for the cottage and garden we had both worked so hard to restore. Sometime later, chatting to my dear friend Barbara Chalkley, she said she worked at Wimpole Hall and would I like to get involved. It sounded good to me, so for the next eleven years I joined the Wimpole Hall Living History Team, and what fun we had with the children, acting out life as in 1843. I only gave it up last year due to very poor health.

I have been so lucky. I spent eleven years back at my old school teaching many subjects, and eleven years at Wimpole with all those adorable children and lovely, lovely friends. One must just count ones blessings and I do. Thank you Meldreth for the last 31-32 years of so much happiness, from all my wonderful loving and caring friends. I thank you from my heart. Keep dear old Meldreth just as it is – caring and loving each other as you all do and watching out for each other.