You are here: HomenextPeoplenextObituariesnextJoyce Howard 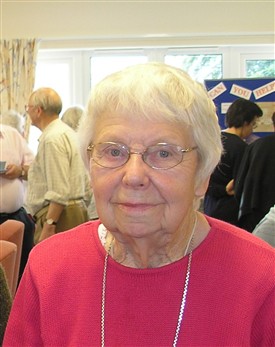 The following obituary first appeared in the January 2010 issue of Meldreth Matters.

Joyce, who died on 6th November 2010 aged 89, came to Meldreth as a Land Army girl in 1941. Joyce was brought up near Manchester and worked in a department store before she embarked on the train journey to Meldreth which changed her life.  She arrived at Meldreth Station in the company of another Land Army girl and they were taken to Chiswick Farm where they lodged in the cottage attached to the farmhouse. They had their food prepared by Mrs Vellum and they were allowed to have a bath in the farmhouse. Joyce found the winters very boring but loved the spring and summer days in the orchards. Her main job was to supervise twelve lady fruit pickers. She would weigh up the fruit and help Mr Howard to reckon how much money each picker had earned as they were on piece-work. Joyce said she was never happier than working in the orchards. Joyce joined the Red Cross and remembers driving an ambulance. She loved dancing and this helped her to meet many local people.

After the war ended Joyce went back to Manchester for a short while but she had formed an attachment with Andrew Howard and back she came to Meldreth.  Andrew and Joyce were married in 1953 and Joyce settled down as a fruit farmer’s wife. In the late fifties Andrew Howard sold Chiswick Farm and he and Joyce eventually moved into 6 Chiswick End. Andrew and Joyce had a son Graham, who like his father had a passion for cars.

Joyce became involved with the Cub Scouts as Baloo The Bear. She met her long time friend Sheila Pinney through the Scouts and their friendship lasted until Joyce’s death. Joyce also helped out at the Baby Clinic in Melbourn.  A turning point in Joyce’s life was when she worked for the Tote, which took her to all the leading racetracks in the country. She enjoyed meeting many of the colourful characters that frequented the racing industry and had numerous stories to tell about them.  Joyce loved gardening and walking. I remember seeing her and Andrew striding out towards Shepreth, where they would have lunch at The Plough. She was also an avid reader of books and The Daily Telegraph.

Joyce helped out at Addenbrooke’s Hospital directing people to various clinics and did a spell as a voluntary driver helping patients get to the hospital. She was also an enthusiastic deliverer of Meldreth Matters in Chiswick End. It was always a pleasure to see Joyce walking down the drive at number 16, as I knew I would catch up with all the local news.

After Andrew died Joyce had a wonderful helper in Helen Wedd, who devoted herself to Joyce’s needs. Another good friend was Rowena Allen, who used to take Joyce to lunch at Waitrose and remembers how intelligent and bright she was and that Joyce was fond of lavender scented tissues.   Malcolm and Eileen Farmer tended her garden and Joyce was never short of visitors. She loved watching her favourite television programmes, Waterloo Road, Strictly Come Dancing and Casualty.   On her eightieth birthday she had lunch at Browns restaurant and then had a walk round the Botanical Gardens in Cambridge.

After Joyce moved to Moorlands in Melbourn she was asked what it was like. Joyce replied, “It is okay in the daytime but there is not much night life”. I enjoyed my visits to see Joyce. She was always interested in what I had been doing and she never complained even if she may have been in pain. Two years ago she attended a jazz concert in the company of Peter and Julie Draper that I had arranged in Cambridge. It was wonderful to see her enjoying the concert and she always wanted to know when the next one was going to take place.

I had the pleasure of interviewing Joyce for Meldreth Local History Group last year and it was such fun and so interesting.  That is how I will remember her, having a good laugh and a joke.