You are here: HomenextPeoplenextObituariesnextEileen Jacklin 1923 -2013 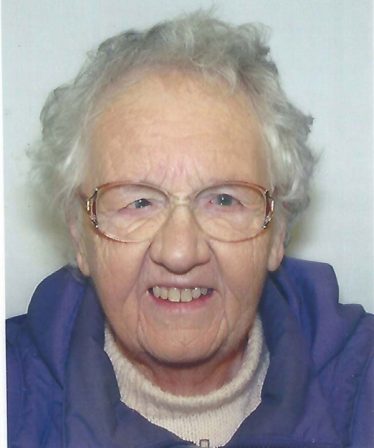 The following obituary first appeared in the March 2013 issue of Meldreth Matters.

Eileen, who was born in Litherland, Lancashire in 1923, passed away in Adenbrookes Hospital on 2nd February after a short illness.

Eileen married Keith in 1947 at Holy Trinity Church, Meldreth.  They lived in Shepreth for their first three years together, where their daughters  Carol and Susan were born.  In 1951 the family moved to Meldreth where Eileen and Keith lived together for the last 62 years.

Eileen spent twenty years working as a Home Help for Cambridgeshire County Council.  During this time she could frequently be seen cycling between Meldreth and Melbourn to visit her charges, many of whom became lifelong friends, and the families of whom have maintained contact with Christmas cards and letters.  When Eileen retired she volunteered as a helper at Moorlands Day Centre in Melbourn where over a period of eighteen years she formed many lasting friendships.

In her spare time Eileen enjoyed cooking, knitting and needlework.  For many years she attended the needlework classes at Meldreth Primary School which were run by Dorothea Jude.  Eileen found no difficulty in reaching the high standards demanded by Mrs Jude and many of the tapestries which now adorn her home had previously been exhibited at local events.  In more recent years Eileen enjoyed the activities of the Good Companions Club and Meldreth Local History Group.

Eileen was a loving and caring wife, mother, grandmother and great grandmother.  She will be greatly missed for her smile, giggle and gentle caring ways.